A U.S. government tribunal canceled trademarks of the NFL’s Washington Redskins on Wednesday because they disparage Native Americans, setting the stage for a court battle with the team’s owner. 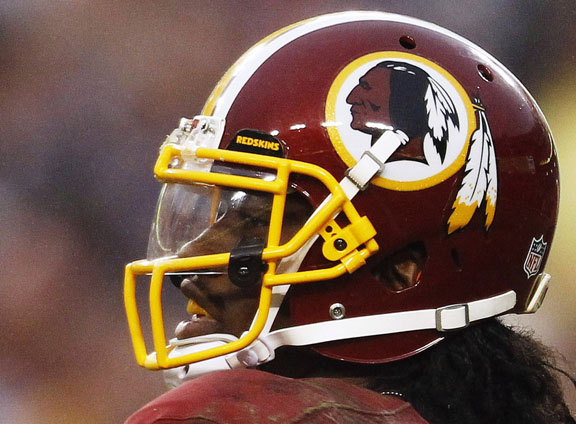 The 2-1 decision by a Patent and Trademark Office administrative tribunal heightens pressure on the Washington football club to change its name following decades of criticism by Native Americans and others who say it is a slur.

The franchise said it would appeal the ruling in the case, in which five Native Americans had sought to overturn six Redskins’ trademarks.

The PTO tribunal found at least 30 percent of Native Americans found the name “Redskins” disparaging from 1967 to 1990, when the trademarks were registered.

“Petitioners have shown by a preponderance of the evidence that a substantial composite of Native Americans found the term REDSKINS to be disparaging in connection with respondent’s services during the relevant time frame,” the decision said.

The ruling does not mean the trademarks can no longer be used by the National Football League club, only they are no longer registered. The trademark protection remains until appeals are completed.

The decision strips the franchise of legal presumption of ownership and the ability to use the federal trademark symbol and block importation of counterfeit Redskins goods.

Bob Raskopf, a trademark lawyer for the Redskins, said the club would appeal the ruling to federal court. He said the case was the same as one in which the tribunal canceled the Redskins’ trademarks in 1999.

A court overturned that decision on appeal, saying the petitioners had waited too long to assert their rights after the first Redskins’ trademark was issued in 1967.

Citing tradition and history, team owner Daniel Snyder for 14 years has defied calls to change the club’s name, which dates from the 1930s.

The NFL, the most popular sports league in the U.S., declined to comment and referred reporters to Raskopf’s statement.

Analysts said the ruling had limited impact since it affected only six team trademarks and registration safeguards remained intact during appeal. But the decision put more pressure on the Redskins to change the team’s name, given rising public objection to it, they said.

“This could be close to the final straw in forcing the NFL and Daniel Snyder to change the name of the team,” said Brad Newberg, a trademark lawyer with Reed Smith LLP in Falls Church, Va., said in an e-mail.

He added if the opinion was upheld, the team could use the Redskins trademark without much trouble. But its ability to stop others from using the Redskins name would be limited, cutting into team profits and marketing, he said.

The decision drew praise from the Oneida Indian Nation and the National Congress of American Indians (NCAI), which have campaigned against the name.

The ruling will prompt a name change “if only because it imperils the ability of the team’s billionaire owner to keep profiting off the denigration and dehumanization of Native Americans,” Oneida Indian Nation representative Ray Halbritter and NCAI executive director Jackie Pata said in a statement.

Half the U.S. Senate, all of them Democrats, last month urged the NFL to endorse a name change for the franchise. President Barack Obama also has weighed in, saying before the ruling that if he owned the team he would consider changing the name.