A surfeit of clients

Djawid Taheri doesn’t want to turn clients away, even if they can’t afford to pay his fees. As an immigrant from Afghanistan and a prominent member of the Toronto Afghan community, he feels compelled to respond to the needs of people who don’t speak English or understand the Canadian legal system and could probably not find anyone else to help them. Yet, even though Taheri maintains that “money isn’t everything,” he does acknowledge he also has to make a living out of his solo law practice. 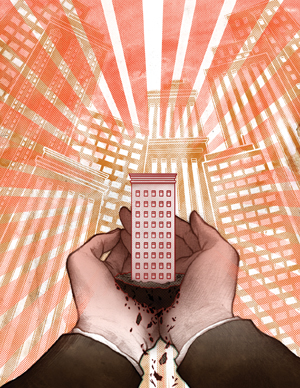 Fernand Majid faces similar pressures. An Urdu-speaking lawyer of Pakistani background, who hails from New Brunswick and now has a solo practice in Toronto, Majid has often taken on litigation cases where the client’s resources run out before his legal remedies are exhausted. “So you end up seeing the cases through, even though you’re not paid for it,” he says.

That is the downside of running a small ethnic law firm. The upside is there is no shortage of potential clients in under-served diverse communities and many of them can afford to pay. Either way, the demands are huge and highly complicated by the cultural differences and language barriers that clients face. And running such a practice well, according to Taheri, Majid, and other lawyers serving such communities, requires a mix of determination, discipline, flexibility, and creativity.

“It’s more time-consuming, more challenging, but more rewarding,” says Taheri, who admits that being single and not having many family commitments makes it easier to spend hours advising clients who may not understand enough about Canadian law and customs even to know whether they have a legal problem or not. He believes he may save himself some time with individual clients by educating the community as a whole about legal issues by hosting a local call-in radio show.

A key concern for many lawyers in ethnic or multicultural firms, particularly those serving the Muslim community, are the problems faced by clients questioned by law enforcement or intelligence agencies in anti-terrorism investigations. Faisal Kutty, co-founder of Kutty Syed & Mohamed in Toronto, says there are virtually no legal remedies available for someone who loses his job, has a marriage fall apart, or gets on a no-fly list as a result of police questioning employers, friends, and family members or contacting other law enforcement agencies in connection with unsubstantiated suspicions. “It’s frustrating and disillusioning. We’re spinning our wheels,” says Kutty, who ends up spending a lot of time with these clients, even though there is little he can do for them, because he is concerned about the injustice they face, as well as the broader societal issues their cases raise.

Kutty says he and the two other principal lawyers in his practice, all “refugees” from Bay Street, “didn’t go into law to make money” and end up doing a lot of pro bono work. They can do this and still maintain a viable practice, he says, because of the loyalty and support of corporate clients from within the Muslim community. Those clients value the work they do and are prepared to pay a premium for their services, even in situations where they would pay less for the services of a junior lawyer in a larger firm.

In this way, a lawyer’s altruistic motives and the dynamics of an ethnic or faith-based community can help with the viability and potential business success of an ethnic law practice. As Kutty puts it, “At the end of the day, people come to us because we’re serving the community in terms of advocacy.”

Iven Tse, who runs the solo practice Iven K.S. Tse Law Corp. in Vancouver, says he doesn’t have to do any marketing since almost all his clients come from personal referrals, particularly from leaders in the Chinese community. However, he says, he has to be flexible in negotiating his fees since many recent immigrants assume they can haggle with professionals over fees, just as they would in their homeland. Their assumption is they will get a better deal if they refer other clients and Tse says it is worth his while doing what he can to accommodate them.

Tse says it is important to be able to offer a variety of legal services in a practice like his in order to respond to the varied and changing needs of the community. For example, he is finding that people whom he assisted with immigration matters 10 years ago are now coming to him for help with real estate deals.

The long-term survival of an ethnic law firm also depends on its ability to adapt to the changing dynamics and legal needs of the diverse communities that it serves, according to Juan Carranza, founder of Toronto-based Carranza Barristers and Solicitors. A native of El Salvador, he opened a small solo practice in the 1990s, focused on serving the Central American immigrant community. To begin with, many of his clients needed help with refugee and immigration issues. But, as the political situation changed in Latin America, there were fewer refugees and clients began coming to him for different legal needs, one of which was personal injuries, an area he had specialized in while articling. At the same time, he found there was a huge need for legal services among other ethnic groups in the highly diverse community in which he was located.

So Carranza shifted the focus of his practice towards personal injury work and began hiring lawyers and support staff with the language skills and cultural background to serve the various other ethnic groups in the neighbourhood. His firm now has nine lawyers and a total staff of 46 people, who can provide services in 17 different languages. “Now I understand that we have made diversity a strategic priority. But that lingo didn’t exist for us then. We were simply responding to the reality,” Carranza says.

Now that diversity has become a strategic priority for many law firms, the small ethnic practices face more competition from larger firms.  Carranza says he doesn’t feel threatened by this trend. He says he has the advantage of being there first and having grown his practice from within the ethnic communities, rather than overlaying a diversity initiative onto a larger firm that never made this a priority in the past.

Kutty welcomes this trend and believes it will enhance the work his firm does in the Muslim community. Islamic finance, for example, is an important aspect of some of the corporate work that his firm does, because it’s a key priority for many members of the community. But, he says, the applications of Islamic finance are limited as long as the concept is not widely accepted in the broader community. With larger firms now making this an area of specialty, it is likely to get more respect from government and the community as a whole.

Anyway, says Kutty, his reason for setting up a law firm for the Muslim community was not that the community didn’t want to be served by mainstream firms, but that the community was being overlooked by these firms and not receiving adequate legal services. “Now that we have shown there is a way to meet these needs and still make money out of it, then hopefully the larger firms will come into the picture and that’s good for everyone.”

Freelance journalist and business writer Kevin Marron can be reached at kevin@kevinmarron.com