A candidate in the Law Society of Upper Canada bencher election is raising concern about changes to the regulator’s online directory of lawyers and paralegals that allows them to identify their main areas of law or legal services. 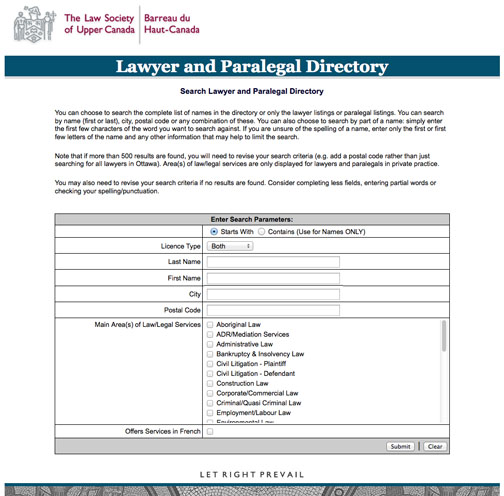 According to Benmor, lawyers received an e-mail from the law society in the fall about upcoming changes to the online directory. The biggest change since then, he notes, was the ability to identify the lawyer or paralegal’s main areas of practice, something he says is “misrepresentative because the regulatory body is allowing people to self tag.”

Benmor’s concern is with the validity of those practice areas — for both lawyers and paralegals — and the public’s perception of what they mean.

“There’s no warranty as to their level of scholarship or competence in that field,” he says, giving the example of him going out and touting himself as a class actions lawyer.

“By going on the law society web site and listing myself as a class actions lawyer, there’s no cost to me,” he adds.

“It creates a ripe opportunity for people to be serviced by people who aren’t competent,” he says, citing the stiff competition for legal work.

Benmor, a candidate in the April 30 LSUC bencher elections, would prefer a system that sets some sort of standard for when a lawyer can list a particular practice area. For example, he says the law society could set some sort of minimum amount of time lawyers devote to their practice to in order to identify under a particular area as well as a certain amount of continuing professional development in that field.

According to law society spokeswoman Susan Tonkin, the practice area search function went live in February. “The purpose of listing areas of law/legal services is to provide better access to members of the public who are searching for a lawyer or paralegal,” said Tonkin in an e-mailed response to questions about the changes.

“The option isn’t a requirement but is available to lawyers and paralegals in private practice and is done via self-identification through the directory portlet on the LSUC portal for licensees,” she said.

“Areas of law/legal services they can choose from are based on those available in the lawyer annual report and paralegal annual report.”