Following news of the impending retirement of Supreme Court of Canada Justice Thomas Cromwell, former Liberal minister of justice and attorney general Irwin Cotler is calling for change in the way SCC justices are appointed. 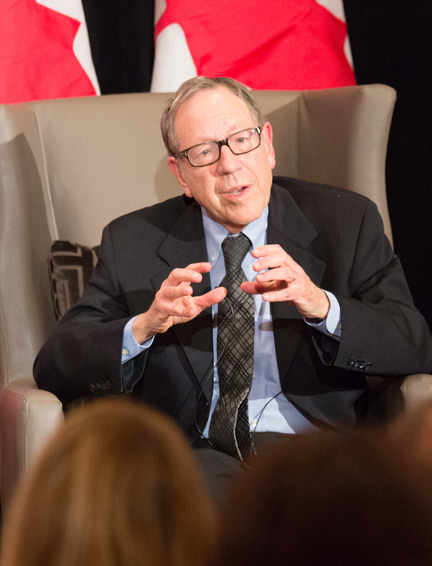 Based on his own times as AG, Cotler has recommended a four-stage process be implemented to select the next justice for the top court.

“Regretfully, the judicial appointments process for the Supreme Court of Canada has been effectively dismantled,” says Cotler, the former MP for Mount Royal and attorney general from 2003 to 2006. Cotler was in Toronto for an event for the Pearson Centre for Progressive Policy last week.

“What we need to do . . . is to return to what I once enunciated as the four stages for a comprehensive, and representative and inclusive judicial appointments process for the Supreme Court of Canada, that will be anchored in merit, that will reflect our diversity, and will end up in having not only the best people appointed but achieving the best process for that purpose,” said Cotler.

Based on his experiences, Cotler recommends a first stage where a protocol would be established, spelling out the people the minister of justice would consult in her search for a new justice, and the personal and professional qualities the new justice would hold.

“They would engage in their own independent consultation process, and take that group of five to eight that they got, and winnow it down to three,” said Cotler. “They were also able to suggest somebody that might not have been part of the initial five to eight, if there were compelling reasons that a person was overlooked or should be considered.”

In the third stage, Cotler says the minister would “re-enter the consultative process” after receiving the short list and discuss the results.

In the fourth stage, a parliamentary hearing would take place to discuss the choice.

“I’m saying that [Trudeau] bring back the four-staged process, as I outlined it. I think each stage can be refined and improved, and that we have a process that is open, transparent, comprehensive, inclusive and accountable,” said Cotler. “The public is part of that transparency and accountability process.”

Cotler’s calls for change aren’t new. In 2014, he suggested the Conservative government then in power “adopt a more representative and inclusive approach similar to that which I employed as minister of justice, in consultation with Parliament

“That approach could include a more broadly representative and inclusive judicial advisory selection panel, where no political party has a majority (as the government now gives itself), parliamentarians as a whole are in the minority, and the provincial attorney general and provincial bar are represented, along with the Canadian Bar Association and the Canadian Judicial Conference; a protocol of consultation published by the minister of justice, setting out whom the minister intends to consult and with whom the advisory panel will meet; a public announcement by the minister of the criteria by which each candidate will be evaluated; and a final hearing at which the minister of justice – and not only the nominee – answers questions from parliamentarians, notably regarding how the nominee meets the established criteria,” he wrote then.