Don't be afraid of change

When asked if the legal profession can move into the future without external investment, Law Society of Upper Canada CEO Robert Lapper was unequivocal. 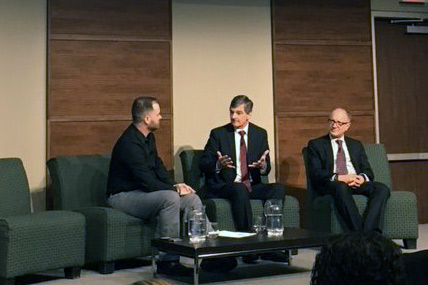 He was responding to an audience question during a session on the new realities of practising law at The New Frontier of Legal Innovation summit held at MaRS in Toronto yesterday.

Lapper noted that while the discussion of alternative business structures is currently somewhat on the backburner at the LSUC, it’s still on the table. And he is quite insistent that for the law society to meet its responsibilities of regulating in the public interest as well as ensuring access to justice, that the profession is going to be forced to open up so non-lawyers can invest in and provide legal services to the public.

“We haven’t got the balance right yet. We are late to the party,” he said. “Our regulatory system is largely still a 19th century model of a sole practitioner with a quill pen in a country law office.”

Bentley’s view is equally unambiguous: “Within 18 months I see one province opening up to ABS and then it’s game over for everyone else.”

There is going to be “an economic reality that is going to require investment by non-lawyers” being driven by innovators and entrepreuners who don’t want lawyers to control what they’re doing, he said.

And they are the ones who are going to start addressing the 85 per cent of Canadians’ legal needs that aren’t being met.

“Where is the duty and obligation to start providing services to those 85 per cent?” asked Lapper.

Getting there is not that hard, he pointed out. There’s also money in it.

“What is missed by most lawyers is that many of those people have money. They can afford some legal solutions — it it was affordable and looked like a legal solution,” said Bentley. “They don’t want to pay for process.”

He added, “I’m not sure there’s an appreciation of how much money is on the table for lawyers. How much the opportunity is for individual lawyers and how quickly that is going to be filled by others if lawyers don’t do it.”

And technology is a big part of what can drive change, they said.

Many solutions the public are looking for don’t necessarily involve courts but will still require legal assistance. Bentley agreed technology can boost access to justice but it doesn’t mean the end of lawyers.

He pointed to online dispute resolution that is being piloted in British Columbia and added England is also doing it, particularly in family court.

“Out of court resolution does not mean no lawyers,” Bentley told the packed room.

That can mean dealing with issues both before and outside of court. There are solutions that are relatively easy, he said, including mandatory information that is provided by the courts; an easy screening process to move people into streams; and even a triage system.

“You can change positively the outcome in the family court for more than half of the people within 90 days,” he stated. “I call on the law society to take the lead on this and push it as hard as we can.”

Lapper responded that they are in “violent agreement” about the need for change, noting the LSUC along with the Ministry of the Attorney General and former chief justice Annemarie E. Bonkalo are looking into the scope of practice and more.

“What we hope will come out of that is what info should we have at the start of a family law issue and who should and could provide it,” he said.

Part of the problem, said Lapper, is lawyers “get a bit afraid of doing that” because they realize there are many pieces that might not have to be done by lawyers and that’s frightening.

As Bentley noted: “Law is not so different as we like to think. We refused to look at law as the provision of service or information. We have treated it as journey that you have to pay for each step. We need to reinvision it and how the consumer gets the results.”

For more on the lively discussion about the future of law, technology, and innovation from The New Frontier of Legal Innovation Summit, check out the #lextech16 hashtag on Twitter.