India has a common law tradition, is a member of the Commonwealth, is English speaking, and has an almost unlimited market potential with more than 1.1 billion people. Conducting legal business in the world’s second-most populous country takes knowledge of more than the laws governing companies; it takes patience, cultural sensitivity, and on-the-ground support. 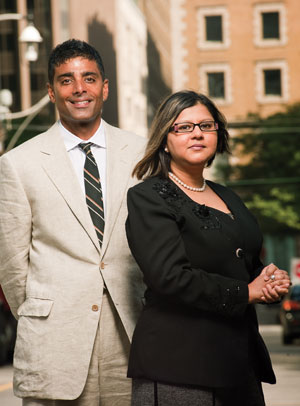 Talk to any of the firms with India specialists, or those that have brought in high-powered talent to engage the South Asian gem and they say first-hand knowledge is key. While India may be new to modern capitalism, the ancient barter system that relied on face-to-face negotiations is ingrained in the country’s heritage. For nearly 3,000 years the silk routes linked traders, merchants, pilgrims, and nomads from Europe to the Far East criss-crossing India.

Today’s silk route is more likely to float through the Suez Canal, zip between continents electronically, or fly in cargo planes. In 2008, nearly $2 billion in direct foreign investment occurred between Canada and India — up more than 150 per cent from the previous year. So, it is not surprising Canadian law firms have looked for ways to tap into the burgeoning market.

Firms have sought out different strategies to access this potential business. There are practice groups made up of lawyers, often of Indian descent, who specialize in other practice areas. There are smaller, less formal associations that combine lawyers whose practice areas are common with markets their clients seek to access abroad. There are specialists with foreign relations experience littered throughout impressive resumes. Then there are independent affiliations between law firms in Canada and abroad.

One thing is for sure: just about everyone who has done business in India strives for on-the-ground connections. Yet standing in the way of Canadian law firms, many of which have opened offices in places like Kazakhstan, Japan, Hong Kong, and China, are rules against foreign firms setting up practices in India. Further regulations prevent Indian firms from having direct partnerships with foreign counterparts. “They are a bit restrictive about foreign lawyers practising,” says Soma Choudhury of Ogilvy Renault LLP’s India practice group. Her philosophy on doing business in India is very simple: engage those working in the country, travel to India, meet with the decision-makers, and get to know the laws.

While the rules prevent Canadian firms from opening offices in Mumbai, Delhi, or Bangalore, Choudhury says it is only a matter of time before that changes. “The reality is at some point it is going to change,” she says. “In the future, it will be like many industries, it will open up, but as of now you can’t go and just set up shop. There have been some slow changes to set up a limited partnership.”

Montreal-based Sunny Handa, co-head of Blake Cassels & Graydon LLP’s India practice group, also agrees personal relationships play a major role in doing business in the subcontinent. In his case, first-hand knowledge may be just as important. Handa was invited to accompany the Quebec government on its last three trade missions to India from 2006 through 2007. It gave him a window into the way business works in the country. He expelled fears of lack of control on corporate information by relaying a story about corporate security being far more than a swipe card. In India, it’s machine-gun-toting guards who search employees entering and leaving work, cameras at work stations, and rules on what can be brought into the offices.

More than a story about security, it relays the serious business attitude corporations have in India. Whether it is security issues or reaching a deal or understanding with a foreign entity, in India you are likely to see business people who don’t take chances with half measures. That includes when the heads of a company are needed to close a deal and “senior management takes a personal interest. They are also, and there may be a cultural relevance to this, they are roll-up-their-sleeves involved in it,” Handa says of top management. “It is not a culture that is beset on ceremony where the highest person sits in an ivory tower and you never see them. If they are needed, they’ll be at the table.”

Natalie Ochrym, chief compliance officer with Sun Life Financial Inc., agrees the people who are involved in transactions with overseas business are often the decision-makers. This means Canadians wishing to do business in India must also have high-level people in their negotiations. “My experience has been when you speak to people there, the people there are the ones who can make the decisions,” says Ochrym. “If it is something that is important to them, speaking from my experience, make sure the right people are at the table to do that. In fact, it is interesting the people I have dealt with there are people who are on an aggressive timetable and in a way that is very liberating.”

Sun Life Financial has an affiliate in India and is in the process of potentially expanding its business there. Ochrym says there is great value to having contacts with Indian law firms that understand local business practices and the business environment. Once your company is ready to commence a business relationship, travelling to India to be part of the final negotiations is very important. “Be prepared to sit there, not for very long, be prepared to sit there to work that out face-to-face,” she says. “I’m not sure it would work long distance.”

How other Canadian law firms access the Indian market varies. Aird & Berlis LLP’s strategy in emerging economies such as India is to have experts who understand the culture, business, and government. Peter Sutherland, former high commissioner to India in Delhi, was brought in to Aird & Berlis to tap into his past relationships to help drive business to the firm. He says references matter. In a lot of transactions involving India, the Indian principles have gone to their business colleagues looking for referrals for partners in Canada. He says Canadian firms wishing to encourage Indian business have been looking to market to companies directly in India. His goal is to entice mid-size Indian companies considering investment in Canada to engage his firm.

Another way to access the Indian market is through international associations of independent law firms such as Lex Mundi. Its Canadian members include Blakes, Farris Vaughan Wills & Murphy LLP, and McInnes Cooper. In India, Amarchand & Mangaldas & Suresh A. Shroff & Co. is associated with Lex Mundi.

Cheryl Hodder, a partner with McInnes Cooper in Halifax says having an affiliation gives her firm confidence to recommend the Indian affiliate to clients. Having met the principals of the Indian firm through the affiliation means she has direct knowledge of who she’d be sending potential clients to. “Of course McInnes Cooper doesn’t know anything about practising law in India,” she says. “We would know by sending our client to an Indian representative of Lex Mundi that we are sending them to a firm that is considered to be one of the best firms in its jurisdiction.”

Hodder says Lex Mundi members must meet stringent requirements including the capacity to offer a wide range of business law services. Firms are also reviewed on an ongoing basis. The affiliation is perfect for an Atlantic Canadian law firm as India is 2,400 nautical kilometres closer to Halifax than any other North American port — a fact not lost on the Port of Halifax.

In 2006, the port authority signed a memorandum of understanding with India’s oldest freight-forwarding company Jeena & Co. Later, the port hired its first overseas employee, Sachin Singh, to work at the freight forwarder’s offices in India, promoting trade through the Nova Scotia capital. Although the port is a McInnes Cooper client, it did not use the firm’s Lex Mundi connection, choosing instead to work with another Indian firm.

Harpreet Oberoi, a partner with Jotwani Associates in New Delhi, says his firm provides global legal advice around the clock to international clientele in Europe, Australia, China, Japan, the United States, and Canada. While it has not been swamped, Oberoi says in the past year his firm saw Canadian client numbers go from zero to six. The latest trend has been corporate counsel and corporations contacting the firm directly, rather than going through their outside counsel at home. “I would say we have seen a steady or growing interest in India,” says Oberoi.

Most of the work Jotwani Associates does relates to foreign companies seeking market access. But there is also an outsourcing component. Document and contract review based on corporate guidelines is a common service the firm provides at a fraction of the price of Canadian firms. “[Outsourcing] is coming directly from corporate requests,” Oberoi says. “Vetting their contracts, looking at their contracts from different perspectives; it is broad work. They might give their standard guidelines and then we might see if the contracts meet those guidelines. So that kind of work is coming from corporations directly and I am quite excited that they directly contact us.”

The firm provides intellectual property outsourcing, drafting lawsuits, e-discovery, contract management, and paralegal support. The majority of the business comes through references. Oberoi says any time a foreign company contacts his firm the first thing they want to know is who else have they have done work for.

Ravi Shukla of Lang Michener LLP, who practises information technology and Internet law with an emphasis on intellectual property, says outsourcing just makes sense in tough economic times. “If they provide effective services at far more cost-effective rates than we can do locally, then we ought to jump on that and companies are,” he says. “I have got to say, in this environment where cost reduction is key we are seeing a ramp-up where companies had thought about doing this, but are now taking the plunge.”

Shukla says Lang Michener is a mid-size firm that doesn’t have a formal India practice group. However, the firm recently opened an office in China due to what he described as the Vancouver office “punching above its weight.” He further says any work with India would likely go across his desk in the Toronto office of the firm.

Read the other section of our Doing Business in Asia cover story here: Riding the Pacific wave.