An awful lot of Canadians are literally sick of their legal problems and that’s having an impact on health care costs, according to new findings of a study by the Canadian Forum on Civil Justice. 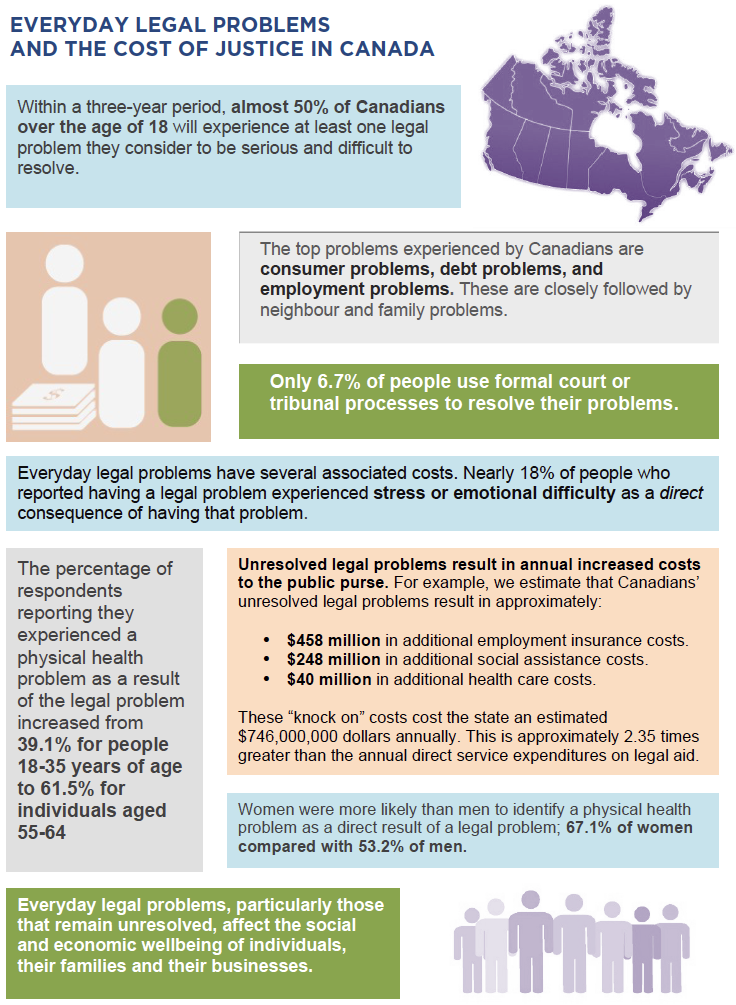 Almost 40 percent of people between the ages of 18 and 35 reported experiencing a physical health problem as a direct result of their legal problems. The number is even greater for people between 55 and 64 at 61.5 per cent.

The findings are a part of an ongoing five-year national study looking into the social and economic cost of Canada’s justice system.

“We’re concerned by the level of impact on society. No doubt that number is of concern,” says Trevor Farrow, associate law dean at Osgoode Hall Law School and the chair of the CFCJ.

But Farrow, the principal investigator of the cost of justice project, says the numbers did not surprise him.

“Quite frankly, while I’m certainly concerned about this, we expected the numbers would be significant,” he says.

That’s a conservative estimate based on one additional visit to the doctor each year as a result of legal pains.

“It’s based on annual estimates of what the health care system costs per person and what a modest increase per person amount to,” says Farrow.

He notes the details of these findings will be released in a more fulsome report in the future. As a whole, the ongoing study is also contemplating the mental health impact of unresolved legal problems, says Farrow.

But health care isn’t the only sector feeling the sting of unmet legal needs. A fact sheet published yesterday by the CFCJ says we’re also spending $458 million in additional employment insurance costs every year due to unresolved legal issues and dishing out an extra $248 million in social assistance costs.

What this means is “a well-supported, functioning justice system helps to reduce the knock-on costs of unresolved legal problems,” says Farrow. “The fewer of those problems we have, the more money we’ll be saving elsewhere. It’s not an isolated problem, it’s a collective problem that we need to notice.”

While the lack of access to justice is a well-known problem in Canada, the CFCJ study, funded by the Social Sciences and Humanities Research Council of Canada, is hoping to achieve a more sophisticated understanding of what the cost of that really is.

“What we didn’t really know is exactly what that [lack of access to justice] amount to in economic terms and also in related terms in health and wellbeing,” Farrow says. “I think the important thing is, from a user-centered perspective, we start to understand the connections between law and legal problems as part of broader social problems.”