The Supreme Court of Canada has ruled that the mandatory minimum sentences in place for illegal possession of a firearm are unconstitutional. 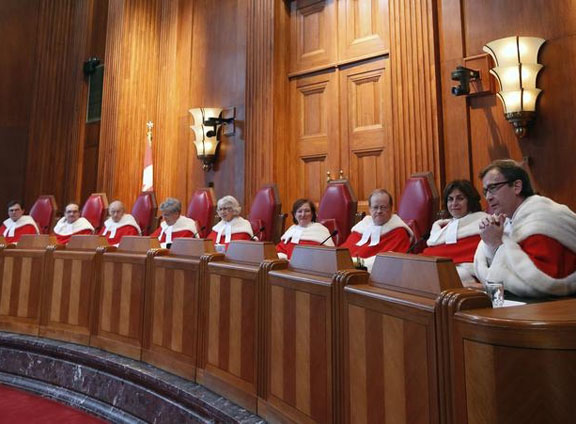 The 6-3 decision released this morning in R v. Nur and R v. Charles upheld earlier rulings of the Ontario Court of Appeal and struck down another aspect of the federal government’s crime legislation.

The majority decision, written by Chief Justice Beverly McLachin, found that the three-year minimum penalty for a first offence and five years for a subsequent offence, violate the “cruel and unusual” provisions of the Charter of Rights and Freedoms.

“Mandatory minimum sentences, by their very nature, have the potential to depart from the principle of proportionality in sentencing. They emphasize denunciation, general deterrence and retribution at the expense of what is a fit sentence for the gravity of the offence, the blameworthiness of the offender, and the harm caused by the crime. They function as a blunt instrument that may deprive courts of the ability to tailor proportionate sentences at the lower end of a sentencing range.”

The court concluded the firearm possessions offences are too broad and captured conduct that was closer to a licensing infraction, such as a spouse who finds herself in possession of her husband’s firearm and breaches the regulations.

“The bottom line is that s. 95(1) foreseeably catches licensing offences which involve little or no moral fault and little or no danger to the public. For these offences three years’ imprisonment is grossly disproportionate to a fit and fair sentence,” wrote McLachlin for the majority.

In finding that the Criminal Code sections are unconstitutional, the chief justice stressed that trial judges are not prevented from “imposing exemplary sentences that emphasize deterrence and denunciation in appropriate circumstances.” In fact, the court upheld the original sentences of 40 months for Hussein Jama Nur and seven years for Sidney Charles, both of which were greater than the mandatory minimums.

“This is not a free pass for hard-core offenders. The impact [of the mandatory minimums] was most acutely felt by people who were at the low end of the range,” says Feder, a partner at McCarthy Tetrault LLP in Vancouver.

The decision gives trial courts the leeway to craft an appropriate sentence for the less serious offenders, says Feder.

Joanna Birenbaum, who represented the intervener the Canadian Association for Community Living, says the gun provisions have the same flaws as other mandatory minimum sentences that are still in place.

“Most of the mandatory minimums do not consider the unique circumstances and needs of an offender with a disability, such as a developmental disability or mental illness,” says Birenbaum.

The analysis of the Supreme Court and its use of the “reasonable hypotheticals” approach, means other mandatory minimum provisions, especially newer ones, may be vulnerable to a Charter challenge says Michael Dineen, who represented Charles.

The facts in Nur and Charles “were not good test cases,” but the reasonable hypothetical analysis means “you can challenge a law as soon as it is implemented,” explains Dineen, a partner at Dawe Dineen in Toronto.

Far from being controversial, reasonable hypotheticals “are a long established part of constitutional analysis,” says Dawe, who suggests the provinces that intervened were seeking to implement an “American style” approach where only the particular circumstances of the offender could be considered, in deciding if a law is constitutional.

In the majority decision, McLachlin referred to what she described as “exaggerated debate” about the legal concept. “At bottom, the court is simply asking: What is the reach of the law,” and what is its “reasonably forseeable impact,” she wrote.

The dissenting ruling, written by Justice Michael Moldaver, with justices Marshall Rothstein and Richard Wagner concurring, found that the mandatory minimum provisions did not violate the Charter.

The fact that the illegal firearm possession provisions are hybrid offences is a “safety valve” to ensure that the least serious offenders are not facing three years in prison wrote Moldaver.

“The least blameworthy conduct, licensing-type cases, is meant to be prosecuted summarily, thereby avoiding the application of the mandatory minimum,” said Moldaver.

He added that if the Crown proceeded improperly and it led to a “grossly disproportionate” sentence, there are remedies for an accused under s. 24(1) of the Charter.

This view was flatly rejected by the majority of the Supreme Court.

“The protection it offers against grossly disproportionate punishment is illusory: in practice it would create a situation where the exercise of the prosecutor’s discretion is effectively immune from meaningful review. The abuse of discretion standard is a notoriously high bar and has no place in this Court’s jurisprudence under section 12 of the Charter,” wrote McLachlin.

“This leads to a related concern that vesting that much power in the hands of prosecutors endangers the fairness of the criminal process. It gives prosecutors a trump card in plea negotiations, which leads to an unfair power imbalance with the accused and creates an almost irresistible incentive for the accused to plead guilty to a lesser sentence,” she added.

McLachlin also cited a legal paper on mandatory minimums written by Ontario Superior Court Justice Renee Pomerance: “The determination of a fit and appropriate sentence, having regard to all of the circumstances of the offence and offender, may be determined in plea discussions outside of the courtroom by a party to the litigation,” wrote Pomerance, about the practical impact of mandatory minimum provisions.

Charter rights cannot be limited to a framework that relies almost entirely on the Crown “doing the right thing,” says Feder. “It is cold comfort to say, let’s just trust the state.”