The Supreme Court of Canada starts its winter session today. Here are the appeals the SCC will be hearing this week. 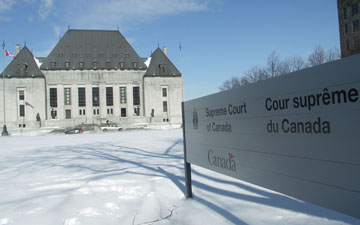 Charter of Rights and Freedoms: Benjamin Cain MacKenzie was stopped by two RCMP officers along the TransCanada Highway. The officers used a sniffer dog to search his vehicle and found 31.5 pounds of marijuana. MacKenzie was arrested for possession of a controlled substance for the purposes of trafficking. At issue is whether the officers violated his right to be secure against unreasonable search and seizure under the Charter of Rights and Freedoms by conducting a sniff search of his vehicle.

Criminal: Kaitlyn Ruth Smith was the driver of a vehicle involved in a car accident, in which one of the four passengers was killed. Blood and other samples were taken from Smith at the hospital. Following the toxicology report, she was charged with impaired driving causing death among other charges. At trial, the Crown failed to establish the reliability of the hospital’s analysis of Smith’s blood alcohol level and she was acquitted. The Alberta Court of Appeal allowed the appeal and ordered a new trial.

Civil procedure: During a trial, Wayne Penner was arrested for causing a disturbance. He filed a complaint with the Niagara Regional Police Services Board but the arrest was upheld. Penner then sued the Police Services Board for unlawful arrest, unnecessary use of force, false imprisonment. and malicious prosecution.

Legislation: This case involves a dispute over $12,014 that a company owed the federal government in previously collected GST and Revenu Québec’s requirement that TD Bank pay part of it from the company’s bank account.

Taxation: The minister of National Revenue reassessed GlaxoSmithKline Inc. by increasing its income based on the fact that it overpaid its non-arm’s length supplier for the pharmaceutical ingredient ranitidine. The Tax Court of Canada upheld most of the reassessments but the Federal Court of Appeal set aside the Tax Court’s decision and ordered the case be reheard.