This week, the Supreme Court of Canada will begin its winter session of hearings. The court will get off to a busy start with six appeals including: an extension request for the assisted dying legislation; the right to engage with regulatory bodies; minimum sentences for drug offences; burden of proof in workers’ compensation claims; the cumulative value of circumstantial evidence; and the “mistaken belief” defence in sexual assault cases. 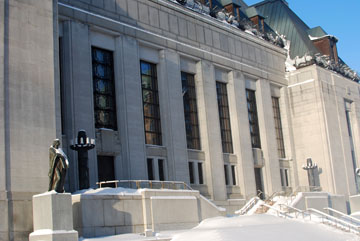 Charter of Rights: Last year, the SCC ruled in favour of Lee Carter, who joined with others in challenging provisions in the Criminal Code against assisted suicide and euthanasia. The court issued a suspended ruling that required Parliament to draft constitutionally sound law by February. The SCC will review federal lawyers’ request for a six-month extension.

Supreme Court rules Canadians have right to doctor-assisted suicide, The Globe and Mail

Charter of Rights: Jessica Ernst sued EnCana Corp., the Alberta government, and the respondent Energy Resources and Conservation Board, alleging that EnCana’s hydraulic fracturing has polluted the aquifers feeding her water supply and that the province and its regulators failed to protect the environment. Ernst also alleges the board refused to accept communications from her as long as she issued public criticisms in the media. On appeal, Ernst argued the board, by attempting to censor her comments, breached her freedom of expression. The appeal court, however, found the board was granted statutory immunity from such charges. The SCC will review the parameters of that immunity.

Charter of Rights: The appellant was convicted of drug possession for the purposes of trafficking. The sentencing judge found that provisions within the Criminal Code mandating a minimum sentence of one year constituted cruel and unusual punishment, and found the legislation to be of no force and effect. On appeal, the sentencing decision was set aside. The SCC will determine whether the mandatory minimum breaches the Charter of Rights.

Administrative law: The tribunal’s appeal involves the case of three laboratory technicians who contracted breast cancer and applied to the Workers’ Compensation Board for benefits. The tribunal found that the technicians had met the burden of proof in establishing a causal connection between their employment and their medical conditions. On appeal, however, the court determined the evidence was insufficient. The SCC will decide whether the tribunal is required to find a sufficient causal connection or whether any causal connection will do.

Criminal law: The appellant was originally acquitted of a manslaughter charge, after the trial judge found the Crown’s key witness to be unsavoury. The Crown acknowledged this and entered 19 items of corroborating evidence. The trial judge reviewed each piece independently, not cumulatively, and found them to be of no confirmatory value. The trial judge, in addition, refused to allow text messages to be entered into evidence, deeming them hearsay. On appeal, the court found the trial judge to have erred and ordered a new trial. The SCC will review the scope of confirmatory evidence in such cases. A publication ban is in place.

Criminal law: The appellant was accused, along with his two friends, of sexually assaulting a woman in the park. He was acquitted at trial after presenting evidence from a police interrogation where he claimed the woman was heavily intoxicated and invited the encounter. The acquittal was quashed and a new trial ordered after the appeal court determined the accused had not taken reasonable steps to assure the victim was consenting. One judge offered a dissenting opinion, suggesting there was reason to conclude the accused had mistakenly inferred consent. The SCC will review the “mistaken belief” defence. A publication ban is in place.