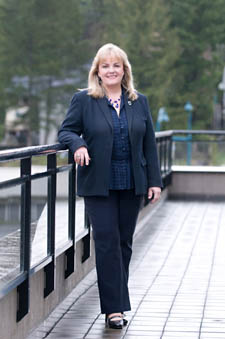 Findlay took 54.2 per cent of the vote in her riding on May 2. She had 14,870 more votes than her closest rival NDP candidate Nic Slater.

She has practised law in Vancouver and the Lower Mainland most of her life, representing clients at every level of court including the Supreme Court of Canada. Findlay has been active in the Canadian Bar Association and is the founding chairwoman of the B.C. Women Lawyers Forum and National Women Lawyers Forum, and a former 1997-98 president of the CBABC. She was also a member of the national task force on court reform.

Her community involvement includes working with MP Jim Cummins on fisheries and native land management issues, serving on the Vancouver City Planning Commission and chairing it in 1987, and appearing before the House of Commons and the Senate Committees on Aboriginal Affairs.