“For us, the greatest advantage you can give your client is trial experience,” says Darcy Romaine of the firm, which is dedicated to personal injury litigation with a focus on complex cases. “Trial experience discourages discounted offers, sharpens a lawyer’s ability to predict outcomes, and most importantly, gives the lawyer the confidence to settle cases based on the evidence and not a fear of the courtroom.“

The number of trials and the size of the challenges the firm takes on are disproportionate to its team of four. In addition to Romaine, a named partner, the firm is rounded out by founding partner Tim Boland and lawyers Erin Farrell and Michael Hanton. Their work speaks for itself and simply put; Boland Romaine delivers for its clients.

Along with the rest of the legal world, Romaine and his colleagues have adapted to a more virtual practice in light of the COVID-19 pandemic and the pause on jury trials in favour of judge alone trials. Currently, in the midst of a virtual trial, along with a renewed approach to documentary evidence, the firm set up a virtual courtroom with cameras strategically placed to replicate direct eye contact between the lawyers and witnesses.

While practically a virtual trial simulates the courtroom well, says Romaine, the gravity of the architecture and solemnity of the physical courtroom is impossible to recreate, and most certainly a loss. 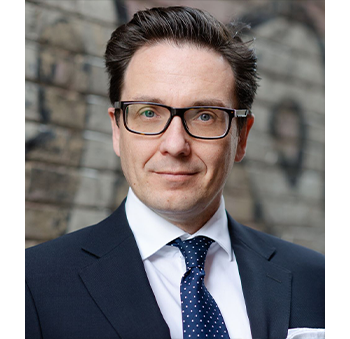 Darcy Romaine is a trial lawyer for the seriously injured. He has won trials where liability is complex and where the injuries involve catastrophic brain injury, complicated orthopaedic injury, and severe burn injury. Professionally, he is best known for his trials involving municipal negligence and his courtroom efforts to have regulations governing municipality maintenance obligations struck for providing unsafe and inadequate levels of care to the motoring public.

Darcy has also acted as outside counsel on behalf of the Ontario Public Guardian and Trustee, representing those whose injuries render them incapable of making legal decisions. Notably, such cases include a successful 22-day trial against the Ontario Provincial Police, Pelletier v. Her Majesty the Queen, in which a cyclist was struck and rendered catastrophically injured by an OPP cruiser. Another case of Darcy’s, Youssef v. Redi-Mix Limited et al., went to the Supreme Court of Canada to interpret the Residential Tenancies Act and a landlord’s negligent property management, which contributed to a tenant’s livestock escaping the property and catastrophically injuring a passing motorcyclist.

Darcy is a current director of the York Region Law Association. From 2010 – 2017, he was a director of the Ontario Trial Lawyers Association (OTLA). In 2015 he was selected as OTLA’s representative to review Ontario’s proposed Protocol for Traffic Injury Management, to question the research scientists who authored the protocol, and to make submissions to the provincial government.

Darcy is also a frequent speaker at conferences concerning personal injury trial practice, focusing on municipal liability and trial conduct. He has presented at the Advocates’ Society, the Canadian Institute, the Law Society of Ontario, and has chaired and spoken at conferences with the Ontario Trial Lawyer’s Association. He has published numerous trade papers and articles on civil litigation and co-authored the chapter on municipal liability in the Oatley McLeish Guide to Personal Injury Practice in Motor Vehicle Cases.

His peers recently selected Darcy for inclusion in the 2019 edition of the Best Lawyers in Canada. More important than such recognition, Darcy would argue, are his trial and appeal results.