As the debate over Trinity Western University’s law school continues, a Toronto law firm has raised almost $15,000 through a crowdfunding campaign for a pending court challenge of the B.C. government’s approval of the new faculty. 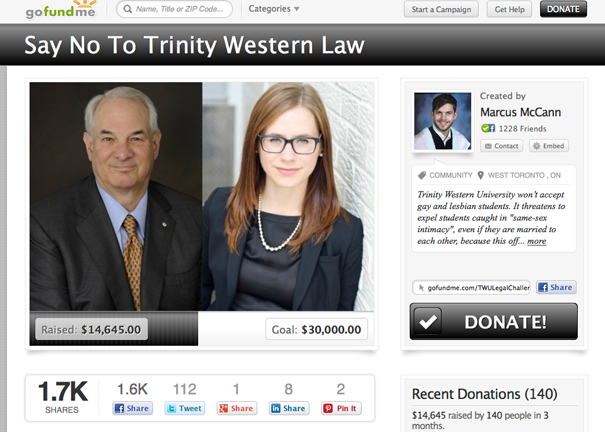 “We’re doing this pro bono. . . . We just don’t want to be out of pocket for the disbursements,” she adds.

The goal is to raise $30,000 for a Charter of Rights challenge the firm plans to launch in the B.C. Supreme Court in April. The controversy, of course, relates to gay and lesbian rights at the Christian-focused law school set to open in 2015. The school’s community covenant agreement includes a statement about abstaining from “sexual intimacy that violates the sacredness of marriage between a man and a woman.”

In an appearance in Nova Scotia earlier this month, Trinity Western president Bob Kuhn argued law societies not accrediting Trinity Western graduates would discriminate against them.

Some lawyers, however, feel otherwise. “Trinity Western University won’t accept gay and lesbian students,” the crowdfunding campaign’s web site states. “It threatens to expel students caught in ‘same-sex intimacy,’ even if they are married to each other, because this offends its interpretation of the Bible.”

According to the campaign, “TWU’s proposed law school will discriminate against queer persons by imposing a queer quota. There are already not enough law school places for the students who want to become lawyers. And by letting Trinity Western create a school that bars gay students from attending, the Federation of Law Societies would create a quota system: fewer law school places would be available to LGBTQ students than to straight students. The quota system was wrong when it applied to Jews and to blacks and it has no place in Canadian society today. This is backwards; a step in the wrong direction.”

Chaisson says the court action “will be a straight-up Charter challenge” to the B.C. government’s approval of the law school in December.

The firm will also be looking at the responses of the various law societies to the question of licensing Trinity Western graduates. That’s a process underway across the country right now, including in Ontario where the Law Society of Upper Canada will be debating and issuing its decision on the matter next month.

Currently, lawyers across the province are weighing in on the issue with the Ontario Bar Association having passed a non-discrimination resolution on Friday. The resolution adopted by the OBA council calls on the law society “to require all legal education programs recognized for admission to the bar of the province of Ontario provide equal opportunity without discrimination” on the basis of several grounds, including sexual orientation.

In addition, it asks the LSUC “to withhold or rescind accreditation from law schools or legal education programs that do not meet this fundamental requirement without prejudice to students currently enrolled or admitted to accredited law schools that lose their accreditation.”