The Supreme Court of Canada today effectively put an end to the Conservative government’s goal of reforming the Senate, pouring cold water over any idea that Ottawa can unilaterally impose term limits or consultative elections on members of the Upper House. 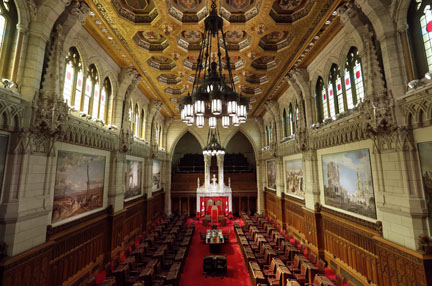 The ruling in Reference re Senate Reform was unanimous, with eight sitting judges as Justice Marc Nadon’s appointment was in question (and apparently no fear of a tie given such a significant Constitutional matter). It came unusually fast, less than six months after the case was heard.

While it is the third time in succesion, the top court has given the Harper government a poke in the eye on constitutional law matters, Prime Minister Stephen Harper says he will respect the Supreme Court’s decision.

“Given the Supreme Court has said we’re essentially stuck with the status quo for the time being, and that significant reform and abolition are off the table, I think it’s a decision that I’m disappointed with [and] that a vast majority of Canadians will be very disappointed with.”

Last month, the court ruled the government could not make unilateral changes to the composition of the top court itself when it rejected the appointment of Justice Marc Nadon. On April 11, there was as second blow to the government, this time on its tough-on-crime agenda; upholding judicial discretion and in the face of legislation aimed at reducin the amount of credit convicts were granted for time served in pre-trial custody.

As the senate reform ruling clearly states, s. 42 of the 1982 Constitution Act requires the approval of the House of Commons, the Senate and seven provinces representing 50 per cent of the population — the so-called 7/50 rule — for any amendments that would alter the fundamental powers or method of selection for the Senate.

The federal government had argued, under s. 44 of the act, Parliament had exclusive legislative authority over the Senate, and moreover, imposing term limits and “consultative” elections did not alter the powers of the Senate or diminish the discretion of the prime minister in appointing Senators.

The court emphatically disagreed with this assessment:

“Fixed terms provide a weaker security of tenure. They imply a finite time in office and necessarily offer a lesser degree of protection from the potential consequences of freely speaking one’s mind on the legislative proposals of the House of Commons. . . . Introducing a process of consultative elections for the nomination of Senators would change our Constitution’s architecture, by endowing Senators with a popular mandate which is inconsistent with the Senate’s fundamental nature and role as a complementary legislative chamber of sober second thought.”

While the SCC acknowledged term limits are not explicitly mentioned in s. 42, granting the Senate protection from unilateral amendments, “it does not follow that all changes to the Senate that fall outside of s. 42 come within the scope of s. 44.”

Abolition of the Senate, meanwhile, would require Ottawa to meet an even higher standard — unanimity among the House of Commons, the Senate, and all provincial and territorial legislative assemblies.

Jasmine Akbarali at Lerners LLP says the ruling was widely expected, given the overreaching nature of the reference questions. The attorney general here, says Akbarali, was trying to find a way to impose significant Constitutional change without consulting the provinces or any of the stakeholders.

“It’s almost cute,” she says. “There was a lot of stuff in there that the court didn’t seem to be too impressed with in the AGC’s arguments. There was a lot of form over substance — the idea that if I can do this without technically changing the word, then I’m okay. It doesn’t matter that I’ve just interpreted things in such a way that they are fundamentally altering the Constitutional structure in this country since Federation.”

In particular, Akbarali suggests it is “ludicrous” to suggest that a consultative process — in which provinces might offer a list of senatorial candidates — would not limit the prime minister’s discretion.

“There's an absurdity to the idea that a federal government would pass an act creating this consultative process, that we would put all of this money into consultative elections, that these results would come out, and that the Supreme Court of Canada should assess that as if it all means nothing. It doesn't make any sense at all.”

Another question asked whether abolishing the Senate by removing any mention of it within the Constitution might be acceptable. Again, Akbarali is flabbergasted, and wonders how the Senate might have dealt with that amendment when it came before Senators for approval.