Was Revenue Canada’s case in the toilet?

A British Columbia Supreme Court case has dealt with what evidence can be considered under solicitor-client privilege when Revenue Canada officials exercised a search warrant, rounding up more than 1,000 documents, including fragments from a toilet. 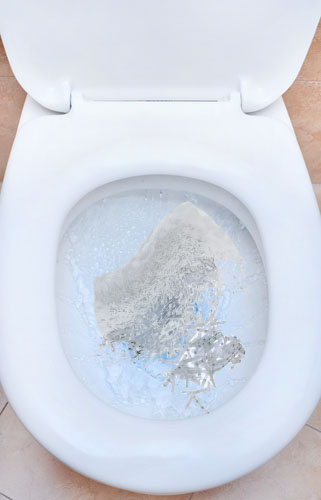 JGC was a businessman, who lived in a building he owned, but also had rental units. CRA began investigating him in 2008 on suspicion of withholding taxes and claiming rental expenses that were not deductible during the taxation years 2006 to 2008. The CRA warrant issued granted officers the right to search JGC’s residence for material relating to rentals and accounting material from the beginning of 2006 to the end of 2008.

CRA officers arrived at JGC’s residence at 9 a.m. but were unable to gain access or a response. Saanich, B.C., police and a locksmith facilitated entry to the suite 55 minutes later. JGC was found locked inside a bathroom and at 10 a.m., he emerged, and CRA officers found numerous papers and fragments on the floor, counter, and in the toilet, which were retrieved.

In total some 1,000 documents and pieces of documents were seized, including diskettes. JGC maintained that the material seized by the officers was protected by solicitor-client privilege. The material was sealed and delivered to the offices of the B.C. Sheriff Services in Victoria until the claim was assessed.

In February 2012, JGC and Revenue Canada officers agreed to transfer the material to the Victoria Supreme Court registry and that JGC’s lawyer would catalogue the material and make copies.

“I decided the proper approach to determining whether any of the warrant material were privileged or beyond the scope of the warrant was to review the document in-camera with only counsel for JGC present,” said B.C. Supreme Court Justice G.R. J. Gaul in his decision from earlier this month.

He finally dealt with over 500 fragments and documents in the reasons for judgement, identifying those that were beyond the scope of the warrant, but focused on determining when documents could be deemed to be covered under solicitor-client privilege.

In determining the solicitor-client privilege question, Gaul referred to the Supreme Court of Canada’s 1980 decision in Solosky v. the Queen drawing upon a definition that confidential communications between a solicitor and client that was inputted into obtaining legal advice was protected, unless that protection was waived.

Gaul found the case related mainly to the legal advice privilege and then referred to B.C. Court of Appeal 2003 ruling in British Columbia (Securities Commission) v. C.W.M to determine the difference between solicitor-privilege documents and those that were merely confidential, stating that only those documents that were confidential and created for the purpose of obtaining the legal advice carried privilege.

He refers to another B.C. decision from 2006, Keefer Laundry Ltd. v. Pellerin Milnor Corp., where the judge said: “A lawyer is not a safety-deposit box.” In Keefer it was found sending documents created outside the client lawyer relationship and not for the purpose of obtaining legal advice did not make them privileged documents.

Gaul ruled “the reverse was true” and documents sent to a party by a lawyer that do not contain legal advice or are not in the scope of the client-lawyer relationship are not privileged.

“A significant number of documents seized from JGC’s residence were financial or corporate in nature, such as trust documents, incorporation documents, financial ledgers and security deposits,” Gaul reasoned. “The general rule is that executed documents, even those prepared by legal counsel, are not privileged because they exist independently of any prior privileged communication between a client and legal counsel. Only unexecuted or draft documents are subject to a claim of solicitor-client privilege as these documents implicitly contain legal advice about possible actions that may be taken.”

As for what were known as the “bathroom” documents? Only 11 were found to not be protected by solicitor-client privilege, relevant, and within the scope of the warrant and therefore useable by CRA.