If it seems like everywhere you go these days someone is talking about alternative fee arrangements, you’re not alone. It’s been a popular topic at legal conferences and workshops for a few years now, but have they really taken off? And what exactly is an AFA — do flat fees or discounts count?

David Felicissimo is one general counsel who wonders that a lot. Last year, he completed an executive education certificate at Harvard Law School where AFAs were a frequent topic of conversation among his colleagues. As the “only legal officer” in a growing Montreal private investment company, Felicissimo works for an organization that specializes in the acquisition and development of Internet-based businesses — their assets are on the web and their audience is worldwide. His very new-economy company still does a lot of work with external counsel based on the old billable hour. 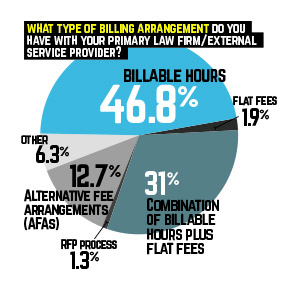 “It’s a topic we talk about often when I speak to other general counsel,” says Felicissimo, general counsel at Valnet Inc. “At Valnet, we’re still using the billable hour with our primary firm in Canada — we have a great relationship with them and we’ve been working with them for eight years.”

In fact, 46.8 per cent of respondents to the annual Canadian Lawyer Corporate Counsel Survey said the billable hour is still the main arrangement they have with their primary law firm, followed by a combination of billable hours and flat fees at 31 per cent. “I thought I was missing the boat on AFAs, but I see it’s one of those things that is discussed all the time but has not really caught on yet in a big way — I have a feeling it probably has more with the bigger firms and with their bigger clients,” he says.

This year, 218 law department leaders from Canadian corporations and government participated in the Corporate Counsel Survey. On the question of what arrangements they use in addition to the billable hour, respondents indicated they use AFAs (12.7 per cent), flat fees (1.9 per cent), and requests for proposals (1.3 per cent), as well as “other” (6.3 per cent) options. Many said they were using a combination of billable hours, RFPs, and flat fee arrangements.

Felicissimo is part of the majority of survey respondents who work in legal departments with less than five lawyers — 56.4 per cent — and perhaps carry a little less budget muscle than, say, the big five banks, which have been the primary drivers of AFAs including value billing.

Of the 12.7 per cent of in-house who said they do use AFAs, 66 per cent said 25 per cent or less of the work they send out falls under an alternative arrangement, while 16 per cent said between 50 and 75 per cent is compensated based on an AFA. Fixed fees for consistent types of work were the most popular AFA with 62 per cent of respondents indicating it was the method they used most, followed at 58 per cent by flat fees for a prescribed phase of work or bundled portfolio of work.

Over the last eight years, much of Valnet’s work has fallen under the categories of acquisitions and tax as well as filing trademarks and copyright in the United States. For the IP work, Felicissimo has been able to arrange flat fees

with external counsel and that’s something the firms proposed. “They have flat fees for trademark filings, copyrights, etc.,” he says.

With the immigration firms he works with, charges are flat fees per file. “We’re in the process right now of applying to bring someone from Colorado to our office and a mid-size Montreal firm is assisting with the matter and all their fees are flat fees. I really liked that — I’ve been reaching out often with questions and it’s good to know when it’s a flat fee. We try to have monthly caps on certain matters, but I proposed a success fee to a German lawyer and he implied that kind of arrangement is prohibited there,” he says.

For large Canadian companies with global operations, the use of AFAs has been more common and going on for a longer period of time. Kerry O’Reilly Wilks, head of legal, North Atlantic & U.K., for Vale Base Metals Business, says Vale has been looking at AFAs for a number of years. With a team of 10 lawyers in Canada and more than 50 globally, Vale is by no means the largest in-house department in the country.
“I think it’s because we are so global and we’re constantly dealing with international firms and a lot of American firms, and probably because there is such fierce competition, especially at the higher end of those markets and they are more willing to be creative and think of ways to win your work, even if you are under budgetary restrictions,” she says.

Vale would prompt its Canadian firms to offer a different kind of arrangement. “A number of years ago, it was fairly novel in the Canadian legal arena — they weren’t doing it and were not all that open to it. But certainly more recently, it is one of the first conversations we have with firms even if we’ve had a long-standing relationship with them, to have the conversation at the beginning of a new matter,” she says.

Especially in a time when commodity markets are not performing all that well, O’Reilly say it’s important for firms to be open to negotiations on fees. “It doesn’t mean that litigation stops — your project pipeline might slow down, but your litigation doesn’t necessarily slow down. So you have to come up with creative solutions with law firm partners to continue to be able to retain great lawyers and the best advisers, but in a way you can accommodate restrictions in your budget,” says  O’Reilly Wilks.

It may take a little probing, but the alternative solution is out there, she says. “I don’t ever want to pay regular rate. I always want to have some kind of arrangement whether it’s a fixed fee or success fee or whether you build in various milestones,” she says. “In any deal you do, if you’re creative, you can structure it very similarly. If you’re just doing small discrete deals, that might be a challenge unless you associate a success fee with getting it done a certain way in a certain time frame. In general, the kind of work we have we’ve always found ways to structure it so we can come up with alternate fee arrangements.”

Of those in-house who answered this year’s survey, 61 per cent said the volume of legal work carried out by their department and external counsel combined was likely to grow in 2016 from 2015.
Overwhelmingly, 81 per cent attributed the projected growth to “company is in growth mode” while many specified “increased regulatory burden.” Other reasons cited included “changing legal climate and developments in aboriginal law” and “increased regulatory pressures.”

One respondent said: “There seems to be more and more compliance/regulatory requirements and procurement groups are insisting on using their own form of a standard contract, which is often not appropriate for the services provided resulting in a much greater expenditure of legal time to address the issues.”

Other responses show in-house counsel are also choosing external legal services providers based on their knowledge of specific lawyers (67.4 per cent), followed by industry/practice area expertise (49 per cent), technical expertise (43.7 per cent), and law firm reputation (24.2 per cent).

Some of the comments on this question indicated the following were also important: “Their ability to deliver timely, relevant advice and their commitment to understanding my business,” as well as “. . . how well their values align with our corporate values and are they willing to be a strategic partner from a business and fee front.”

In-house are also showing their preference for using boutique law firms with 72.6 per cent saying they use smaller specialized firms in the area of IP, tax, employment law, and other areas. National firms still led the pack at 75.3 per cent, with regional firms at 62.6 per cent, global firms at 32 per cent, and alternative firms at 6.6 per cent. LPOs were last at 3.3 per cent.

“I seek out individuals,” says O’Reilly Wilks. “The firm brand means nothing to me unless we’ve been harmed by that firm. But if I’m going to another jurisdiction, I think the brand is more important in that situation.”

When asked if they are asking law firms for a diverse roster of lawyers to staff their files, 76.6 per cent said no — about the same as last year. “I come at it from a unique perspective. I am a woman and I have a biracial family. My eyes are always tuned to what I see on the other side of the table,” says O’Reilly Wilks. “If I was engaging with a firm and all I saw was white men across the table, I would certainly notice it, but in the same breath I have to say, especially in the mining world and throughout my professional life I’ve been blinded to it — I focus on doing the best job I can and I forget I’m a woman and we’re just focused on getting to the finish line and getting that success.”

She says while there are areas where many of the firms are equal, she is “always mindful of the future that will be in front of my kids. If all things are equal and I’m engaging with a few firms and they put forward a woman who is of minority race or biracial, I will certainly take note of that and gravitate towards that firm.”

Click here for a full pdf of the survey.