Courtney Betty has worked in the federal government and large corporate environments, but after years tackling corporate issues, he decided he wanted to get closer to community work and found his way to an old bank building on Oakwood Avenue in the St. Clair and Dufferin area of Toronto. He wanted to help people he felt were left marginalized by the legal system. 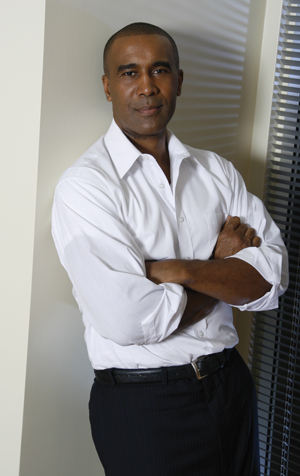 The front of his office has a large sign that reads Betty’s Law Office. He says he was drawn here after seeing a number of high-profile cases he felt left certain communities and individuals marginalized. He saw a lack of legal representation for minority groups, in particular the Caribbean and Chinese communities.

The Jamaican-born Betty started his career working for the Department of Justice here in Canada representing the federal government in over 200 cases before the Federal Court of Appeal. He was then recruited to serve as senior legal counsel at the Jamaica Fair Trading Commission, which focused on the deregulation of telecommunications in the Caribbean nation.

He’s back in Canada and today, the clients who come to Betty’s Law Office are those seeking good legal representation from a firm that offers a diverse roster of legal professionals. Clients can take meetings with the firm’s lawyers in English, Spanish, Mandarin, and Cantonese and often see their own cultural backgrounds reflected back at them. The firm provides services in immigration, real estate, criminal, family law, and civil litigation. Betty has long held the view that there is a niche within the ethnic marketplace of individuals who require proper legal servicing but weren’t getting it — and that it would be a growing  and developing market.

He has been recognized for work he has done in high-profile cases such as that of Shaquan Cadougan, a four-year-old boy who was shot in the summer of 2005 in a community housing area of Toronto’s troubled Jane-Finch community. Betty is part of the team representing the family who has filed a $4-million lawsuit against the Toronto Community Housing Corporation. The suit accuses the TCHC of gross negligence because it slashed its security budget by $4 million the year before the shooting and reduced the security staff from 200 to 80, allowing the drive-by shooting to occur.

In 2007, when 15-year-old Jordan Manners was shot inside C.W. Jefferys Collegiate, it pulled Betty into representing not only the family, but also the community. “It pushed me to look at what was going on. The Jordan Manners case made me realize there was a lot of injustice going on in these communities and I decided to take on the battle in a small way. I truly believe that in a society such as Toronto the cultural aspects of client needs have to be understood.”

Betty says for him, both of those cases weren’t just about the legalities of the issues —  they were about what happens to individuals living in particular communities based on decisions society has made. “In many ways, to achieve the kind of change I felt was critical, it was really important we get the public’s support — there’s the legal side but there’s what else is going on in the public too,” he says.

Bringing a legal voice and attention to under-served communities is something Betty has been trying to do in his firm. “There are so many cultural elements I really have to try and understand. Understanding and applying that cultural sensitivity would be a great opportunity for many firms,” he says.

What he sees as a lack of multicultural representation in Canada’s large legal firms frustrates him, but he is careful to point out that it is not discrimination but economics driving the lack of minority hiring in large firms. Hiring a diverse workforce in the big firms won’t happen because it’s the right thing to do, he says, but because there is some kind of financial incentive. “I would not say it is racism, I would say the economic factors play a great role in driving the decision-making process around hiring,” he says. “On Bay Street I think maybe part of the approach is who their clients are and trying to reflect that in their hiring.”

Betty says the criminal firms tend to be a little more diverse, but they typically aren’t much larger than five to 10 lawyers. “It’s really the corporate, civil, larger entities that need to actively look at the recruitment of minorities,” he says.

Recently, Betty met with some lawyers who specialize in civil litigation and asked them where their visible minority representative was. The question caught the group off guard. “Their response was, ‘Well, we may not have one, but we advertise in the ethnic newspapers.’ It’s a real challenge in that when you look at the reflection of minorities in the large firms you really have to question, ‘Why is it that they are not recruiting sufficient visible minorities?’ I don’t know the answer but I do know it’s not happening. I’m tremendously disappointed in what I see in terms of individuals I know who are in the law firms of say 150 lawyers and there’s only a single junior visible minority associate,” he says.

Is it easier in a smaller firm based in a multicultural community to hire for diversity? “No, to me a good lawyer is a good lawyer, so having a good lawyer that is knowledgeable in a specific area of law, it shouldn’t make a difference whether you’re on Bay Street or in a community atmosphere. For us, it just sort of happened — it wasn’t about going out and actively recruiting. [Associate] John Lee started working with me as a legal assistant 15 years ago and I encouraged him to go to law school,” he says.

Before starting the firm on Oakwood Avenue, Betty worked in the federal Department of Justice prosecuting tax, commercial, and civil cases, but found the issue of diversity was also a problem there. “I went into Justice because I was young and idealistic and thought being there would allow me to bring about justice in some element and it was amazing, but at the same time there was tremendous isolation. If you look at it over the last 15 years within the federal government and Department of Justice, the number of minorities that have actually gone in and left has been huge,” he says.

Betty is also concerned that minority law school graduates are struggling to find meaningful work placement. “We get so many resumes from students for articling positions and many are finding it to be a challenge. Often young lawyers also end up becoming sole practitioners and I think that is very hard when you’re starting out. You need to be in a position where you have mentorship and the experience of other individuals for your first four or five years in practice and that poses another challenge for minorities,” he says.

At the end of the day, Betty is a businessman and his desire to serve the ethnic community is not without a business plan. With Canada’s demographics changing rapidly, he knows minority groups will continue to grow and demand legal representation that matches their own cultural needs.