Half of the discrimination complaints made against lawyers and articling students in the last 10 years were related to gender, according to a 10-year equity report released by the Law Society of Upper Canada this week. 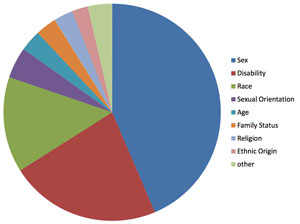 “The report indicates that all forms of discrimination and harassment are still persistent in the legal world and confirms the need for law society programs such as those established through the law society’s retention of women initiatives,” says law society treasurer Thomas Conway. “The report findings also reinforce the value of work now underway by our working group on challenges faced by racialized licensees.”

When it comes to sex discrimination, pregnancy was specifically raised in 46 complaints. Some 151 callers reported sexual harassment, and four complainants raised gender identity.

In contrast, 45 per cent of male callers who reported harassment based on sex were concerned about the way women or gay men they knew were treated.

Despite their growing numbers, the report also said practising law remains a challenge for Ontario’s racialized lawyers due to discrimination.

“The statistical data, research findings and anecdotal evidence suggest that notwithstanding the increase in representation of racialized lawyers, they still face challenges in the practice of law,” the report said.

“We will continue to look at ways to address and prevent discrimination and harassment in the legal profession and address ongoing challenges.”