A well-known criminal defence lawyer has avoided a contempt finding after he skipped out on a sentencing hearing to attend a television interview. 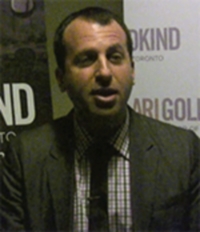 Ari Goldkind faced a rare contempt of court hearing Monday morning after he missed a sentencing for a client on June 8. The former long-shot mayoral candidate and prolific media commenter had agreed to appear on CP24 to talk about a separate case, drawing the ire of Ontario Superior Court Justice Michael Dambrot.

The judge initiated contempt proceedings against Goldkind, but ended them Monday after the lawyer apologised in court and said he would not repeat such conduct.

“I will not leave the court, my colleagues at the bar, or members of the public in such a position again,” Goldkind said at the hearing. “I apologize to your honour personally and the broader court for my actions.”

The sentencing on June 8 concerned the trial of four men accused in R. v. Triolo. Goldkind represented Emmanuel Lozada, one of the co-accused in a fatal stabbing at Toronto’s Nuit Blanche festival in 2013.

Goldkind did not show up that day, leaving the judge, co-accused and their lawyers waiting, but appeared on CP24. He had contacted the Crown the night before to try to reschedule the proceeding, but that was not possible.

The judge then ordered Goldkind back in court to explain why he should not be found in contempt of court.

At a June 19 appearance, Goldkind acted in a way that the lawyer admits was not “as transparent as [he] should have been”, and made the situation worse.

Goldkind’s lawyer, Scott Hutchison, a partner at Henein Hutchison LLP, said Goldkind has reflected since and discussed issues around his conduct with senior members of the bar at length.

Goldkind, who has been a lawyer for 15 years, said he recognized that the circumstances he found himself in did not justify his absence from court on that morning.

“If I had the opportunity to address that situation again, I can assure you, I would not make the same decision,” he said at the hearing.

Goldkind also reached out to the Crown attorney’s office to apologize to the victim’s family in the Triolo case.

Dambrot said he was satisfied with the lawyer’s apology.

“In many cases, the maintenance of the dignity and the authority of the court can be accomplished without a finding of contempt when the court is offered full explanation, a sincere and unqualified apology and some form of remediation,” Dambrot said.

“I am completely satisfied that you have no accomplished all of that and I accept your very full, eloquent and unquestionably sincere apology.”

Lawyers say contempt of court findings against practitioners are quite rare, and that Goldkind could potentially have faced disbarment or even jail time if he was found in contempt.