The Supreme Court of Canada has dismissed an appeal from the Crown questioning a judge’s decision not to impose a fine on a fraudster who bilked Canada Customs of more than $4.7 million because she believed he wouldn’t pay it. 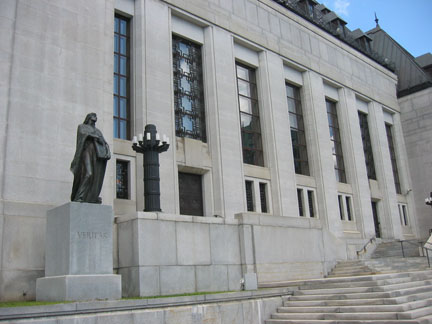 In R. v. Topp, customs broker John Topp recovered over $4.7 million in taxes and duties from clients owing to Canada Customs and then kept the money instead of submitting it to customs. He was convicted of 16 counts of fraud and attempted fraud under the Customs Act in Ontario Superior Court.

The Crown sought a $4.7-million fine and jail sentence. However, Topp’s defence counsel claimed he was unable to pay the fine and produced a letter from Topp’s wife, which stated the family’s financial situation was moderate.

There was no explanation regarding the whereabouts of the money and the Crown was unable to locate it. On May 6, 2008, Justice Deena Baltman sentenced Topp to a five-year jail sentence but didn’t impose a fine because she wasn’t convinced he was able to pay it.

On Nov. 20, 2009, the Ontario Court of Appeal dismissed an appeal by the Crown, stating, “While this is a close call, we think it was open to the trial judge, on the record before her and the submissions of defence counsel, to find that the respondent did not have the ability to pay the fine.”

The Crown filed an appeal to the Supreme Court, claiming Topp was required by law to prove he was unable to pay a similar fine to the amount he was convicted of defrauding. Since he failed to do so, the Crown said Baltman erred by refusing to impose the requested fine.

The Supreme Court disagreed. In its ruling, Justice Morris Fish wrote: “Past receipt of illegally obtained funds does not impose an evidential burden on offenders to prove they no longer possess their ill-begotten gains. In the absence of a credible explanation, however, it will often be open to the court to infer that the offender is able to pay a fine. But the court is not legally bound to do so. The probative weight of the inference will depend on the circumstances, and therefore vary from case to case.”

He added: “While another judge might well have decided differently, I agree as well that it was open to the trial judge, on the evidence and the information placed before her, to decline to impose a fine.”