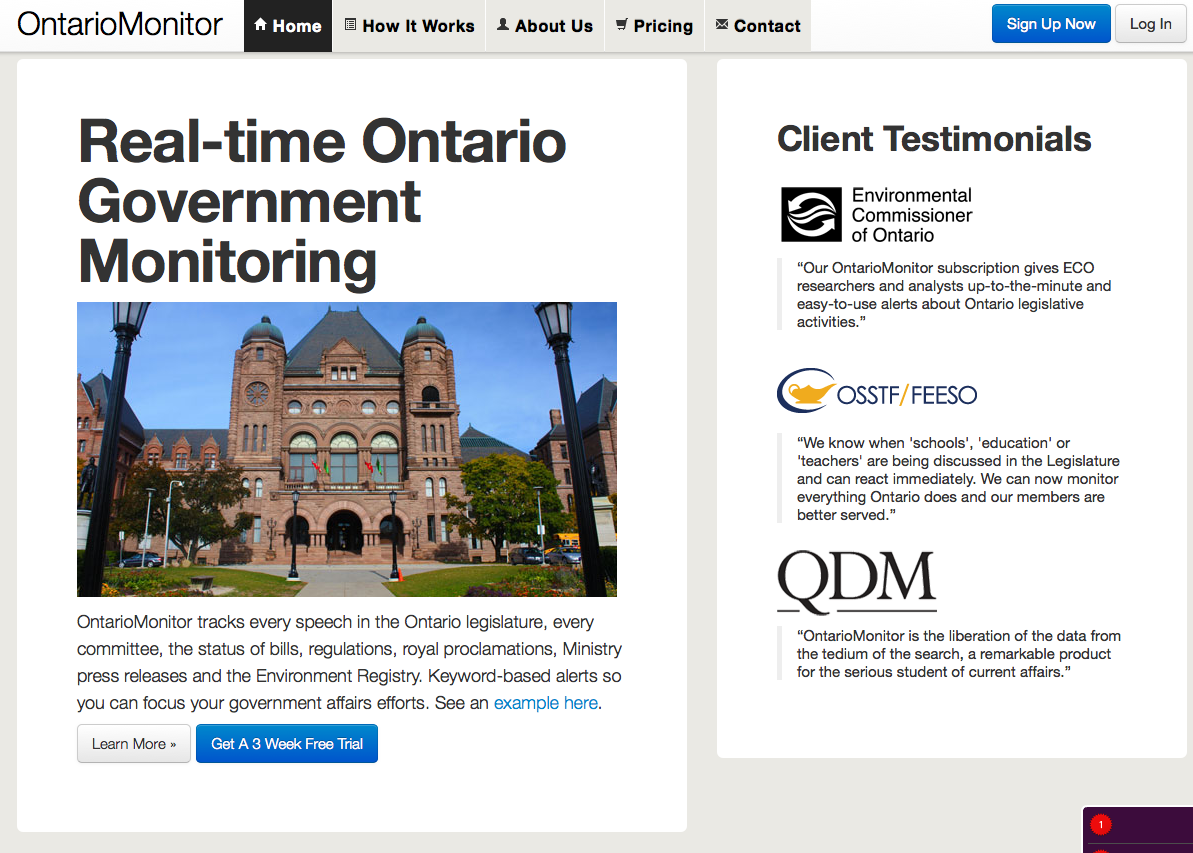 His technology focus is serving him well as a current articling student, he is splittting his term between the technology licensing group at BlackBerry — where he also summered — and McCarthy Tétrault LLP in Toronto.

The idea for the service came to him during a securities class in law school, he tells Legal Feeds.

“The instructor was a partner for McCarthys and she was talking about how they were working on some securities deal and they just happened to notice this budget act that affected the deal she was working on,” he says. “And I was thinking, ‘Hmmm, that probably shouldn’t happen, you should get notified whenever there’s something relevant to you in terms of legal changes.’”

So he created OntarioMonitor.ca, which allows users to follow the goings-on at the Ontario legislature through keyword-based monitoring. Users come up with keywords they would like more information on and any materials that contain those keywords are e-mailed to the users.

For example, if a keyword is mentioned during question period at Queen’s Park, users will receive an e-mail stating who said it, when it was said, what context it was said in, and any other relevant details. Also, if new bills are introduced or changes are made to existing bills containing those keywords, users will be notified.

Cameron-Huff says he originally thought the service would be most useful for people in government relations, but has found it’s also beneficial for lawyers.

“It would really depend on your practice area on how you could use [the service], but definitely changes in regulations is something that [lawyers] need to know about,” he says.

The service is now celebrating its one-year anniversary by offering new features and a free three-week trial for new users.

As a part of its new features, OntarioMonitor.ca will now notify users if ministry press releases contain keywords and they will also be alerted when new sections of legislation become law.

The price ranges from $100 to 250 per user, per month, depending on how many users sign up.

Cameron-Huff has been developing web sites since 2004. He also runs a software and development company called Summerhill Design in Kingston, Ont. He has won various programming competitions in Canada and the United States. In 2008, he joined Ralph Nader’s U.S. presidential campaign team as a software developer.