From jury trials to corporate advocacy, Canadian law students competed fiercely during this year’s mooting season. Now that it has come to an end, the results gathered by 4Students show Osgoode Hall Law School was home to quite a few winners this year. While several Canadian teams are proud to be going on to international moot competitions, other students are heading to the library to complete the semester.

Julius Alexander Isaac Diversity Moot: The Black Law Students’ Association of Canada organizes this moot every year. It focuses on equity and diversity issues, including diversity law, human rights, and equity issues. Held on Feb. 23, this year’s problem focused on the importance of race in the adoption process.
Winner: University of Toronto
Best oralist: Jonathan Chan (University of Toronto)

Kawaskimhon Moot: Western law hosted the 2013 Kawaskimhon Talking Circle Moot. This moot is concerned with aboriginal issues and open to aboriginal and non-aboriginal law students across Canada. This is a non-competitive moot conducted in a circle format. The objective of the moot is to reach a consensus on the problem. It was held March 1-3 at Western University. 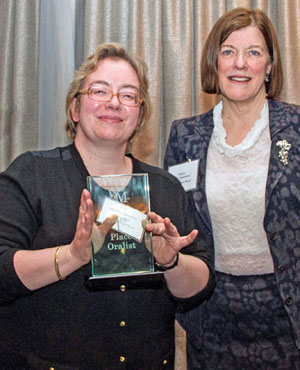 Wilson Moot: Founded in 1992, the Wilson Moot promotes justice for the disempowered within the legal system. It is named after the late Supreme Court of Canada justice Bertha Wilson. This year’s moot dealt with fictional amendments to the Criminal Code that would permit physician-assisted suicide in limited circumstances. The mooters were asked to address whether the denial of access to a physician-assisted suicide for an individual with a mental illness violates the Charter of Rights and Freedoms. The final moot, held in Toronto Feb. 22-23, was between the top two teams from the University of Windsor and the University of Toronto this year.
1st: University of Windsor
2nd: University of Toronto
3rd: Osgoode
Best written argument: U of T
Best oralist: Heather MacIvor
Best factums: U of T 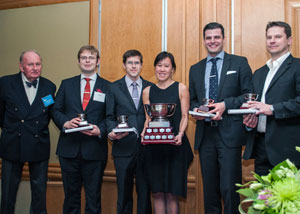 Donald G.H. Bowman National Tax Moot: This is Canada’s first tax moot, named after the former chief justice of the Tax Court of Canada. In its third year, the case was Leblanc v. The Queen, which dealt with whether or not gambling winnings should be exempt from tax. It was held March 1-2.
Overall winner: University of Alberta
Best advocate: Hamid Nuri (University of Ottawa)
Best factum-appellant: Western University
Best factum-respondent: University of Toronto
Hockey Arbitration Competition: This new sports law moot was a salary arbitration competition modeled on the procedures used in the National Hockey League. Created by U of T students last fall, its aim is to give students a chance to sharpen their advocacy skills and gain some experience in the sports law industry. It was held Oct. 5-6, 2012.
1st: Queen’s University (Alex Radin & Chelsea Ritchie)
2nd: University of Windsor (Dan Di Fonzo & Matt Rossetti)
Semi-finalist: Queen’s University (Zahir Ali & Megan Rolland)
Semi-finalist: University of Windsor (Scott Buchanan & Roy Gentles) 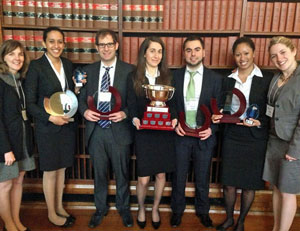 Bora Laskin Moot: The Laskin is a national bilingual moot dealing with administrative and constitutional law. It is named after the late Supreme Court of Canada chief justice Bora Laskin who was one of Canada’s leading legal scholars and jurists. This year’s fictional case was King & Co. Importing Inc. v. Marie-Stella, which dealt with harassment and discrimination issues based on ethnicity in the workplace. It was held March 2.
1st: University of Alberta
2nd: McGill University
3rd: Osgoode
4th: University of Toronto
Best factum: University of Ottawa
Best pairs: Queen’s (Véronique Ethier & Guillaume Leahy)
Spirit of the Laskin award: Université de Montréal

Arnup Cup: This moot is open to Ontario law schools. It’s a competition in trial advocacy and structured as a jury trial. It was held on Feb. 8-9.
Winner: University of Toronto

Guy-Guérin Cup: This annual qualifying bilingual competition is held in Quebec with a focus on criminal law. It was held on Feb. 14-15.
Winner: McGill University

Western/McIntyre Cup: This moot is open to law schools in Western Canada. It is in the form of a mock trial in a criminal prosecution. This year it was held at the University of Victoria Feb. 14-16.
Winner: University of Saskatchewan

McKelvey Cup:
This is the qualifying round for eastern Canadian law students. It was held on Feb. 15-16.
Winner: Dalhousie University 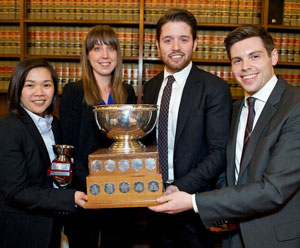 Phillip C. Jessup International Law Moot Court Competition: The Jessup moot is usually based on a controversial topic of public international law. Most Canadian law schools compete in the final round, held on a different campus each year. The final round is hosted by the American Society of International Law. The 2013 moot will explore the factual and legal consequences of climate change on statehood, migration, and foreign sovereign debt. It will be held in Washington, D.C., on March 31 to April 6.