Denise Ann Williams plans to become a judge and by winning the inaugural Harry Jerome Scholarship, she’s well on her way. 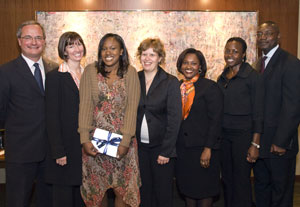 The scholarship for black law students is awarded by the Black Business and Professional Association (BBPA) and sponsored by Fraser Milner Casgrain LLP. Williams, a second-year student at Osgoode Hall Law School, was awarded the scholarship at a ceremony at FMC’s downtown Toronto office on Oct. 26.

“We grew up in a diverse neighbourhood in Toronto and my mother Barbara always instilled in us a strong drive to pursue excellence,” says Williams, who was a competitive athlete in high school and also her class valedictorian. “As a result, I plan to use my law degree to affect policy change that will positively impact the daily lives of blacks and other minorities across Canada. I also hope to add to Ontario’s judiciary diversity by becoming a judge.”

On its sponsorship of the scholarship, the co-chairwoman of FMC’s diversity committee, Kate Broer, says: “Our clients come from all backgrounds and we want our lawyers to reflect that diversity. With this in mind, we put diversity high on our list of priorities in attracting and retaining top talent.”

Williams, 24, graduated with a B.Sc. from York University and has been chosen to be on the equality faculty committee at Osgoode as a student representative for 2007-2008.

Williams has already shown her great academic strength as a winner of the Governor General’s Medal and Rhodes Scholar finalist. She was named University of Ottawa Social Justice Fellow earlier this year for her research on social justice issues and advocacy. Last summer she worked with York Regional Police’s chief equity committee to develop a bias-free policing policy.

The BBPA awards Harry Jerome Scholarships to black students attending a college or university in Canada, in order to further academic excellence among black youth. The scholarship fund was established in 1988 to honour Jerome, who held six world track records during the 1960s and represented Canada in three Olympic Games. He also earned both undergraduate and graduate degrees in science at the University of Oregon and later become a leader in sports administration in British Columbia. He was admitted to the Order of Canada in 1971.