‘Our islands are drowning’

When climate change is a matter of survival for island nations, the urgency of this crisis becomes quite palpable when working with such countries.

The responsibility for this problem is also clearly seen from these island shores that have done little to contribute to the climate crisis but may be counted among its first victims.

As a third-year law student at the University of Toronto, I came to Copenhagen to help lend support to people and countries seeking to achieve a strong agreement on climate change. The 15th Conference of the Parties to the United Nations Framework Convention on Climate Change will determine what happens after the current phase of the Kyoto Protocol expires in 2012.

I am volunteering with the organization Islands First, which is assisting some Pacific small-island developing states (PSIDS) in the climate negotiations. The PSIDS are extremely vulnerable to the effects of climate change but have limited resources to advocate their position. One of my first tasks is to interview Noah Idechong, a prominent environmentalist and politician from Palau.

From our conversation, it is clear Idechong is doing everything possible to protect Palau’s people and environment from the ravages of climate change. He has come to Copenhagen to remind leaders that the survival of small-island developing states is at stake.

A strong climate agreement is necessary, he says, because Palauans “don’t want to get to the stage where we have to prepare for our own extinction.”

Idechong has dedicated his life to marine conservation in Palau. As former chief of the Division of Marine Resources, he reinvigorated Palau’s strong conservation traditions, known as bul, and enhanced them with new scientific knowledge. His work is considered to have spawned some of the most important conservation measures in the Pacific in recent history. 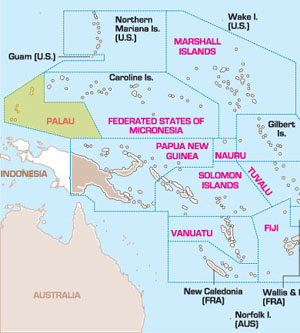 In 1994, Idechong resigned from government to co-found and direct the Palau Conservation Society, the nation’s only environmental NGO. Currently, he serves as speaker of the house of representatives of Palau’s Olbiil Era Kelulau and is a member of the executive board of the Clean Development Mechanism. Idechong has received the Goldman Environmental Prize and a Pew Center Fellowship in recognition of his conservation efforts.

Palau is one of the most biologically rich marine areas on earth. It consists of 340 islands in the Pacific Ocean, 1,000 kilometres east of the Philippines. Its territory contains approximately 700 species of coral and more than 1,400 species of fish. Palau also recently declared itself a shark sanctuary. It has banned all commercial shark fishing in its territory and called for a global moratorium on catching sharks exclusively for their fins. Palau’s waters have been ranked number one among the Seven Underwater Wonders of the World.

However, Palau is suffering from the effects of climate change. Warming ocean temperatures have caused widespread coral bleaching.

Idechong says he remembers how, during the El Nino/La Nina event in 1997-98, 30 to 90 per cent of coral species died in some areas surrounding the islands. This level of coral bleaching was unprecedented. As a result, important fish and jellyfish populations were severely diminished, and local livelihoods were compromised.

Palauans have become increasingly dependent on food imports and are frightened for their future. Some have been tempted to “give up” because they cannot win against climate change alone.

However, Idechong has worked to persuade Palauans to protect their local environment as best they can while their representatives appeal to the international community to take strong action on climate change.

He has worked tirelessly to “get our voice out to the global community — what is happening to our islands, our coral reefs, and our way of life.”

Since “we can’t go to war,” he jokes with me, “Palau and other small-island states must persuade the major countries to take strong action on climate change.”

By the end of the 21st century, the Intergovernmental Panel on Climate Change’s Fourth Assessment Report projected that climate change will raise sea levels by 0.19 to 0.58 metres. The report noted “sea-level rise will exacerbate inundation, erosion, and other coastal hazards, threaten vital infrastructure, settlements and facilities, and thus compromise the socio-economic well-being of island communities and states.”

The resulting inundations will adversely impact coastal settlements, agriculture, and water resources in islands like Palau.

In the Pacific and Caribbean islands, more than 50 per cent of the population lives within 1.5 kilometres of the shore and nearly all major roads, airports, and capital cities are situated along the coasts.

Island settlements can be displaced and vital infrastructure destroyed by climate change effects on sea-level rise, high-energy waves, and storm surge. Some islanders believe it will be impossible to adapt to these changes if climate change continues unchecked.

For small islands, one young person remarked to me, “adaptation means buying a boat.”

In Palau, for example, there have been large crop failures of taro, a local staple, following inundations. Dependence on food imports is becoming increasingly common in the region.

In addition, the IPCC predicts that reduced rainfall and saline intrusion into freshwater lenses could lead to water shortages for some Pacific islands.

The IPCC report highlights the risks of climate change to the long-term viability of small island states like Palau. It concludes, “the potential abandonment of sovereign atoll countries can be used as the benchmark of the ‘dangerous’ change that the UNFCCC seeks to avoid.”

In Copenhagen, Idechong has worked to spread awareness that the fates of island nations like Palau are at stake in the negotiations. He has been impressed by the energy and activism of groups with similar goals.

“NGOs, women, youth, are all putting the message across,” he tells me. “Now it is up to the leaders.”

Palau’s fate rests “at the mercy of strong countries, whose decisions can make everything better or worse.”

He hopes an agreement in Copenhagen will significantly advance the fight against climate change. It was extremely costly for Palau to send delegates to Copenhagen, and it takes these experts away from their responsibilities at home. Idechong emphasizes that Palau “can’t continue to lobby” for another 20 years of climate negotiations.

“We don’t have the stamina for this.”

He remains optimistic, however, that change is happening. He remembers that “10 years ago no one was even listening.”

Now conversations like ours are getting the message out. While some leaders today remain constrained by domestic legislation, he believes that many are more sensitive to small islands’ plight.

Idechong has come to Copenhagen because Palau is running out of time. A strong international agreement is essential to the fight against climate change. He wants to remind world leaders that “our islands are drowning.”