When it comes to trying to avoid getting caught up in the proliferation of anti-corruption legislation worldwide, the Royal Bank of Canada is opting to follow the U.K. Bribery Act and embedding it as part of its global anti-money laundering process. 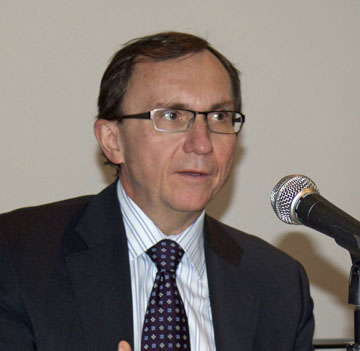 “When the U.K. Bribery Act came out we decided to migrate to the highest common standard,” said Thomas Smee, senior vice president and deputy general counsel, RBC Financial Group speaking on a panel on Canadian securities regulations at the recent Association of Corporate Counsel annual meeting in Denver. “My approach is to go across all of the legislation and go to the highest common standard.”

RBC does business in about 50 different countries in different ways around the world and when the U.K. Bribery Act came out, Smee said the bank decided to find the most onerous piece of legislation and follow it’s recommendations.

“We now ban facilitation payments globally — it’s a good example of how you have to surf the world for the most onerous thing and then adopt that as the standard,” said Smee. “You have to assess the risk of corruption across your organization and the type of risks you might encounter.”

Smee explained that the U.K. Bribery Act has a compliance defence. If you had a tough compliance policy and were following it, when the company, which might otherwise be blameless, is caught in an act committed by an isolated employee it can demonstrate that steps were taken to try and prevent anything from happening.

“It starts at the board level, senior management, approval of policies, escalating reporting hotlines and then you assess the risk of corruption across your businesses in terms of the type of business and where you’re doing business,” said Smee.

“It takes a huge amount of time and attention if you do have a large amount of international business, but you just can’t afford to get caught up in it. My general theme is to say, ‘What can we do so this doesn’t happen?’ Or, if it does happen we can say we did everything possible to make sure it didn’t happen.”

However, some attending the session argued that in some countries there remains a strong need for things like facilitation payments, especially in resource-based industries, often in developing countries where it is considered common practice.

“You’re dealing in many cases with individuals you need an association with to build a business, but they operate under different tolerances and cultural norms than we do. You have to educate and monitor and it can be very difficult,” said David Kohlenberg, deputy general counsel of corporate development and finance law with TransCanada Pipelines Ltd., who also spoke on the panel.

Whatever piece of anti-corruption legislation or policy is developed, it needs to be communicated to all employees, said Kohlenberg. “Special attention needs to be paid to people in your organization most likely to encounter these things.”

According to the U.K. Bribery Act, even failing to prevent a bribe may trigger liability.

“Facilitation and hospitality payments are not permitted whatsoever,” said Kohlenberg. “What I think is going to happen with this proliferation of corruption statutes is there is a significant amount of work that has to be done up front by companies who do work around the world.”

That work, he said, should involve investigating the nature of the business and people they are getting involved in, and it must be monitored on a regular basis.

“When it involves people and places from far flung places in the world it gets very expensive and complicated,” he said. “You may see some companies say it’s too difficult to keep on top of.”