The first Jewish woman appointed to the Supreme Court of Canada has delivered a clarion call for international human rights, arguing in a speech yesterday that the globe has turned a blind eye as intolerance becomes “the world’s fastest growth industry.” 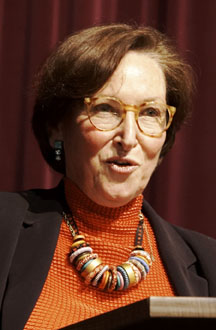 Justice Rosalie Abella targeted the issue — timely in light of recent unrest in Egypt, Tunisia, and other parts of the Arab world — in an address to the Empire Club of Canada titled, “The world is not unfolding as it should: International justice in crisis.” The topic of international human rights is close to the top court judge’s heart: she was born in a displaced persons camp in Stuttgart, Germany, and her brother and grandparents were killed in the Treblinka death camp.

Abella called the recent global events, “a Polaroid picture of international law, justice, and human rights: with time, the picture comes into clearer focus. And with clarity, my deepest fears are increasingly confirmed.” She later explained that, “increasingly I have come to see international human rights law as having a dysfunctional relationship with justice. The rhetoric is beautiful, but it’s all dressed up with no place to go.”

Abella laid some of the blame for international human rights’ poor performance at the feet of the United Nations and other global institutions, which she accused of “playing fast and loose with their legitimacy and our integrity.”

While many people in the Western world feel insulated from human rights abuses, the top court judge pointed out that the Sept. 11, 2001 terrorist attacks on the United States showed that abuses in one part of the world can threaten the safety of citizens in far away places

Accordingly, she suggested countries must more forcefully oppose abuses in other countries. “Silence in the face of intolerance means that intolerance wins,” she said.