Tempest in a teapot?

Strong dissenting voices have emerged at the Supreme Court of Canada and a high level of consensus has disintegrated in the past year, says a report released last week by the Macdonald-Laurier Institute. 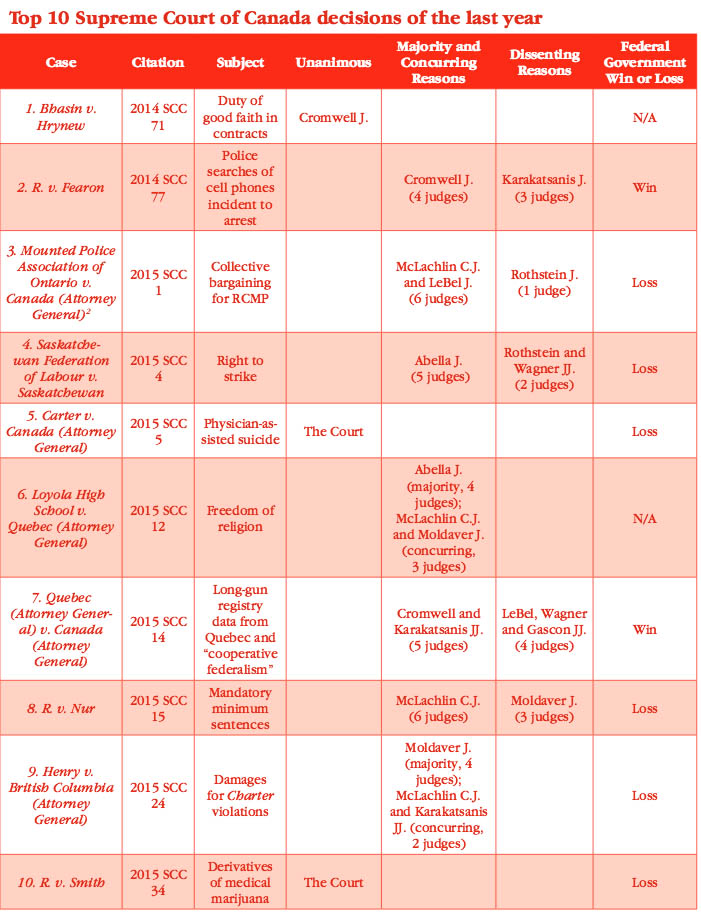 The report by University of British Columbia Peter A. Allard School of Law associate professor Benjamin Perrin is worthy of review, not least of all because of Perrin’s former insider status as special adviser of legal affairs and policy in the office of former Prime Minister Stephen Harper. (You may recall Perrin from his testimony at the Duffy trail, but that’s another story)

Perrin says in the report that among the new developments in the past year for the court was “an increasing amount of discord among the justices, and a sharply reduced degree of unanimity.”

He also points out the former federal Conservative government did not have a sterling year at the Supreme Court, winning only two out of 10 cases Perrin identifies as being major decisions.

These include rulings in Carter v. Canada (related to physician-assisted suicide), Mounted Police Association of Ontario v. Canada (related to RCMP’s right to collective bargaining and freedom to association), and R. v. Nur  (related to mandatory minimum sentences). The report is based on the court’s activity from Nov. 1, 2014 to Oct. 31, 2015, covering Harper’s final 12 months in power.

“In 2015, the outgoing federal government continued its losing streak from 2014, but the level of dissent was remarkable compared to the high degree of consensus last year,” says the report.

“Philosophical fissures were laid bare in the reasons of several judges who cautioned the Court against intruding on Parliaments’ legitimate role in making tough policy decisions.

“It is also notable that the Court continues to overrule its own recent Charter decisions with the express disapproval of some of its members.”

However, Eugene Meehan, who focuses on Supreme Court cases with Supreme Advocacy, says ”dissent is a natural thing” amongst the nine justices.

“Do we need nine like-minded clones on our Supreme Court? We very definitely do not need that,” he says. “Each justice is different from the other, with their own background and experiences, their own learning, and their own style, just like the rest of us humans.”

Meehan says each justice has the opportunity to express his or her own opinions.

“It’s part of the natural order, and part of life. Judging is a human process. Have you always agreed, every single time, with your elder sister or brother? Well, that’s the Supreme Court.”

Meehan says Chief Justice Beverley McLachlin ”has done a great job in maintaining an appropriate and reasonable level of consensus in the court. Complete consensus on all areas, in every issue, in every single case is unrealistic and it is undesirable.”

“For anyone that’s sat down at a family dinner table and any single contentious issue comes up — and the Supreme Court only gets contentious issues — that’s a remarkable level of consensus, as well as group-consensus-building,” he says.

“It reflects most positively not only on the chief justice , but on the court and its judges as a whole. And does so in the very real context of judges still getting to be able to say out loud, what they want to say, when they want to say it, and how loud. Life is a balance.”