The Supreme Court of Canada will hear five appeals this week, including a case involving a Nova Scotia man who was charged with aggravated sexual assault for poking holes in the condoms he used with his girlfriend without telling her. 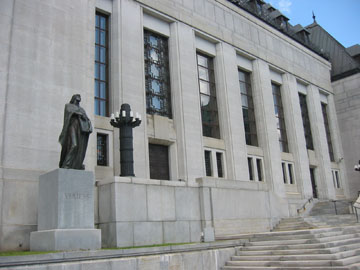 Charter of Rights and Freedoms: Elizabeth Bernard works for the Canada Revenue Agency. She declined to join the union and filed an application for judicial review of a consent order that authorized the disclosure of her home contact information to the union. The Federal Court of Appeal referred the matter to the Public Service Labour Relations Board. The board refused to consider Bernard’s Charter argument and held that disclosure of her information was authorized by the Privacy Act. The Federal Court of Appeal dismissed her application for judicial review.

Other related news articles:
Karen Selick: Get the picketers off my porch, National Post

Nov. 6 — Ontario — John Doe v. Minister of Finance for the Province of Ontario

Access to information: “John Doe” requested records from the minister of Finance concerning amendments made to the Corporations Tax Act. He made the request as part of a dispute of tax liability. The minister denied access to the records because they contained advice or recommendations and therefore were exempt from disclosure. The Information and Privacy Commissioner ordered that the records be disclosed.

Aboriginal law: Roger William, former chief of the Xeni Gwet’in First Nation, filed a claim seeking recognition of aboriginal title to two tracts of land in the Tsilhqot’in traditional territory, which are located in a remote part of the Chilcotin region of central British Columbia and consist mainly of undeveloped land.

Criminal law: Craig Hutchinson was charged with aggravated sexual assault after he poked holes in the condoms he used with his partner, knowing she didn’t want to get pregnant. He was acquitted at his first trial but then the N.S. Court of Appeal reversed that decision and ordered a new trial. At his retrial, Hutchinson was convicted of sexual assault because the judge found that while his partner consented to sexual intercourse, she didn’t consent to unprotected sexual intercourse. The Court of Appeal dismissed his appeal. There is a publication ban in the case.

N.S. man gets 18 months in jail after poking holes in condoms, The Globe and Mail

Criminal law: Border officers found 50 kilos of cocaine in Ajitpal Sekhon’s pickup truck when he tried to cross the border into Canada from the United States. Sekhon was convicted of importation and possession for the purposes of trafficking. The case was entirely circumstantial and the only issue at trial was whether he was aware of the cocaine in his truck. The majority of the B.C. Court of Appeal dismissed the appeal.

Other related news articles:
Cocaine smuggler will not get new trial, News 1130