In the first week of the spring session, the Supreme Court of Canada will hear five appeals including a highly anticipated Charter challenge on court hearing fees from British Columbia, and a case that will determine whether cell phone information accessed by police during an arrest constitutes unlawful seizure (now rescheduled to May). 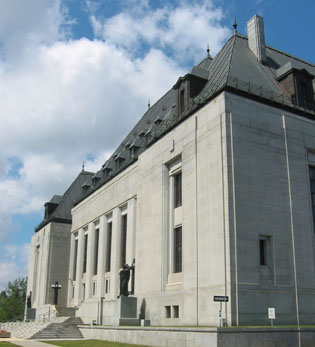 Charter of Rights and Freedoms: The appellants, including the Trial Lawyers Association of British Columbia and the B.C. branch of the Canadian Bar Association, are seeking a declaration that court-imposed hearing fees represent an infringement on access to justice, and run contrary to the Constitution Act and the Charter of Rights. Rules of Civil Proceeding in the province currently provide only for an exemption for the indigent.

Charter of Rights and Freedoms: Mohammad Hassan Mian was acquitted of drug-related charges due in part to the trial judge’s determination that the applicant’s Charter rights — including the right to counsel and the right to be informed of reasons for arrest — had been violated. The appeal court found that the judge erred by considering inadmissible evidence, and issued a new trial.

Criminal sentencing: James Sipos is appealing a 1998 sentence declaring him a dangerous offender and imposing an indeterminate sentence. On appeal, he presented evidence indicating a possibility the risk he poses can be controlled in the community with supervision. The appeal court found the trial judge erred by not considering long-term offender provisions, but applied a curative proviso and upheld the sentence. The SCC will review the suitability of the sentence at trial and whether the appeal court erred in disregarding new evidence. A publication ban is in place.

Charter of Rights and Freedoms: Kevin Fearon was arrested for armed robbery. During the arrest, a police officer seized his cellphone and accessed incriminating information on the device, including a text message and a photo of a gun and cash. En route to the police station, Fearon requested counsel, but was brought to an interview room for five hours before being advised, again, of his right to counsel. Before counsel could arrive, the appellant had made incriminating statements. The SCC will review whether the accessing of phone records was unlawful and whether the appellant’s right to counsel was violated.

Criminal law: John Steele was convicted of robbery after entering a drug store and telling the cashier he had a gun. At no point did he touch the cashier. At trial, the Crown applied for an assessment under the Criminal Code that the incident constituted “use of violence,” which would have formed the basis for an application to declare Steele a dangerous or long-term offender. The trial judge denied the application, ruling only an “implied threat of violence” had occurred. The SCC will review whether the cashier’s state of shock represented “serious personal injury.”

Update: Fearon hearing rescheduled to May.