Who owns the home of the Jolly Fat Man?

As the controversy over who owns the North Pole heats up and countries vie to lay claim to land and sub-sea resources, there is another important legal question that emerges. Who lays claim to Santa Claus' ancestral home? 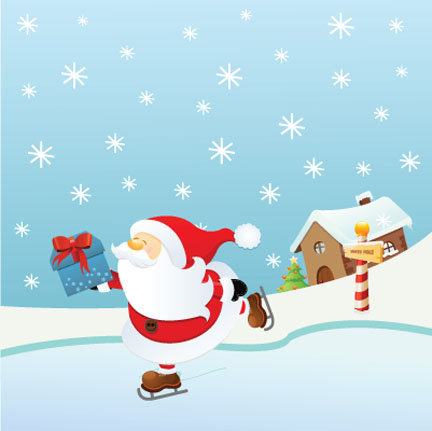 Everyone knows — including the Canada Post office now fielding letters from all over the world from children — that Santa Claus lives at the North Pole. Canada Post has even given him his own exclusive postal code H0H 0H0.

For those who love Christmas, the issue of who lays claim to Santa’s home is far from a laughing matter. Young and old know the North Pole has traditionally been the hang-out of this international icon with a habit of sliding down chimneys, the famous Santa Workshop, and the residence of Santa’s reindeer that drive his sleigh through the night.

Canada’s Foreign Affairs Minister John Baird said his government is not backing down from any legal fight over the North Pole. Perhaps a smart move for any minister at Christmas time. The Senate scandal is still fresh, and it looks like the Conservative cabinet can use a few goodies tucked in their stockings.

Baird maintains that digging in the heels to hold onto Santa’s traditional turf is going to offend two countries. Denmark (the land of smorgasbord, pickled herring, and calorie-rich pastries) and Russia (the land of nesting dolls, vodka, and taxis that are not taxis) are both expected to have dibs on the North Pole as well.

Baird has said Canada has not completed mapping the underwater Lomonosov Ridge the government hopes would effectively link this country to the North Pole and that’s the reason why Canada has only filed a partial submission to the UN Commission on the Limits of the Continental Shelf.

Under the UN Convention on the Law of the Sea, coastal countries are entitled to economic control over the waters that stretch as far as 200 nautical miles (370 kilometres) from their shores. If a country can prove its continental shelf extends even further, it may be granted control of a greater expanse. The issue is expected to take years to settle.

However, there is social data that shows Canada has strong cultural links to the North Pole. Canada has always had Santa living at the North Pole. The Danes don’t even have a Santa but rather have Christmas elves (nissers) while the Russians don’t celebrate Christmas on Dec. 25, but rather Jan. 7 and have a figure known as Old Man Frost who goes around dropping off gifts in a sleigh drawn by horses — not reindeer.

And, according to the Internet, Ded Moroz, as he is known in Slavic cultures, is slim and elegant, looking in a multi-colored, fur trimmed robe. His home is on an estate in the Russian town of Veliky Ustyug. It is to this town where Russian children write with their holiday wishes or if visit so they can ride on Old Man Frost’s sled and get their photo taken.

So, if Russia lays claim to the North Pole and wins, then which country has got the real Santa? And, can Russia stop us from marketing our Western Santa as living at the North Pole? And what happens to poor Rudolph?

While you may be able to merge the Santa figures into one, no one can really visualize the outcome of merging horses with reindeer into one team without getting humane societies and animal rights groups up in arms. And, can you see Rudolph leading such a weird concoction into the star-studded night. It just doesn’t fly and OMG, how do you explain that one to the wee ones?

It becomes even more bizarre should Denmark win in the international court. Right off the bat, one has to rationalize how Santa can come from a place that doesn’t even acknowledge a jolly rotund fellow in red suit with a penchant for milk and cookies. And, the Danes celebrate Christmas Eve, with gift-giving after their Christmas meal. So, for the Danes it is pretty well over when old Santa is just jumping into his sleigh to take off. Once again, it is going to take the best legal minds out there to explain that one to the wee ones.

To make the thing more complex, consider back in December 2010 when Citizenship and Immigrations Minister Jason Kenney attending a citizenship ceremony in Calgary declared that Santa was a Canadian, thus, the red-and-white suit and his ability to freely leave and enter Canada “as a Canadian citizen living at the North Pole.”

In a National Post article, Kenney alluded to the fact that Canada considered Santa’s home part of its turf and has been investing in the North. “We want to ensure that Santa and all Northern peoples benefit from the considerable progress that has been made,” he said. (And no, the story wasn’t a hoax.)

Santa has been a Canadian and U.S. fixture since the early19th century with towns such as Saskatoon having a Santa parade for more than 100 years. If that’s not “cultural use” of the North Pole, what is?

The North Pole has a lot of meaning to Canadians beyond being simply a chunk of ice that serves as a park bench to migrant seals and polar bears. It is the underpinnings of a cultural tradition. Just what will you tell the kids when they ask where Santa comes from — if he doesn’t come from the North Pole? Can anyone imagine the legal battle that would ensue if it were left to federal government to move Santa to a new home? The old gent and his reindeer are a multi-million dollar marketing bonanza and the fights that would erupt amongst the provinces would ruin any peace on earth.

So, listen up Baird. Better put your best legal minds on this one. Because if the Conservatives lose the North Pole, there will not enough coal in all Canada to fill the stockings sent to Ottawa in years of Christmases to come.