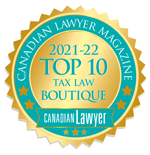 Trying to figure out corporate taxes is an intricate process at any time. However, trying to make sense of tax obligations in a year where COVID-19 brought havoc on businesses will mean they will have to be especially reliant on lawyers and accountants to walk them through what could be a very complicated tax year.

Winners of this year’s Canadian Lawyer’s Top 10 Tax Law Boutiques indicate 2020 will provide some additional challenges when figuring out taxes — especially how to deal with the inevitable losses that many companies have faced because of pandemic lockdowns and the impact they had on revenue and profits.

Anthony Strawson, co-managing partner with Felesky Flynn LLP, says that many of the companies with which he works, especially those in oil and gas, have gone through a few tough years already, and the pandemic has certainly made things worse.

“This year, we’ve seen from clients an emphasis on understanding government subsidies, loss utilization, debt forgiveness type of rules than you might see in more normal times. There is more concentration on harvesting losses, making sure they are in the right places.”

Blair Dwyer of Dwyer Tax Law says one big trend he notices is lawyers “learning to navigate the new rules on private corporation taxation and the complicated tax on split-income rules. While the rules are complex, it is still possible to work with the rules.”

Kim Moody at Moodys Tax Law LLP says one issue he has seen is that many countries — including Canada — were not ready for the impact of doing business remotely or digitally as compared to the traditional bricks-and-mortar approach. Taxation systems “need to be modernized and updated to capture appropriate taxation revenues for profits generated on their residents.”

Added to the impact of COVID-19, boutique tax law firms are seeing other trends that have increased the need for professional services. The partners at Thorsteinssons LLP outline just a few of the challenges that have emerged in tax law.

“Over the past years, there’s been a noticeable shift toward greater complexity and compliance work required, especially in regard to the taxation of private companies,” says Alexander Demner.

Due to general economic conditions, Ian Humphries says there has been a shift away from larger M&A deals — although those certainly still exist — and “toward estate planning, asset protection and loss utilization.”

With government taking on so much debt to deal with COVID-19, there is a fear that future tax bills can only go higher. “There’s a lot of anxiety and discussion around future taxes and what governments might ultimately do to pay for some of these things coming out of the pandemic,” says Felesky’s Strawson.

Moody agrees, saying that COVID-19 has exacerbated this issue but that many governments — including Canada — were spending more than their revenues even prior to COVID, thus putting pressure to increase taxation directly or indirectly. “There are many possibilities for increased taxation and we are watching this closely.”

Vitaly Timokhov, a partner at TaxChambers LLP, says the federal government moved quickly to establish support programs through legislation such as Bill C-14, the COVID-19 Emergency Response Act. But the Canada Revenue Agency has sent strong signals that some of the benefits handed out during 2020 will likely be audited, even though it gave unclear communication on whether support would be given based on gross or net income.

As well, there is concern that the government has not yet communicated how it will pay for all the COVID-19 programs.

“Will it be increase in the capital gain inclusion? A possible increase in GST rates? Or limitations on the principal residence exemption?”

Timokhov adds, “Given the size of the revenue that needs to be raised, it cannot be done through small incremental changes.”

Sheena Bassani of Barsalou Lawson Rheault Barristers & Solicitors says that one side effect of the pandemic was to further “digitize” the economy, leaving more profits outside the reach of tax administrators.

While there have been attempts by the OECD to come up with a multinational solution, Bassani says, “some countries, including Canada, are losing patience and, after launching digital sales taxes, have warned they will deploy their own approach to tax the income of digital giants.”

In late 2020, Canadian Lawyer asked lawyers, in-house counsel and clients from across Canada to vote on the top tax boutiques. They were asked to rank their top firms from a preliminary list, with a chance to nominate a firm that was not included. To qualify for our list and be voted for in our survey, firms were required to derive a minimum of 80 per cent of their work from tax law. Please find a full description of our methodology at canadianlawyermag.com/survey/method.