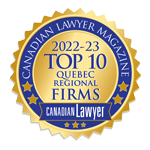 Like law firms anywhere, those in Quebec are facing fundamental change. Not only has the COVID-19 pandemic sped up the use of technology employed to work in a more virtual world, but it has also made a demanding environment for recruiting and retaining talent that much more challenging.

At the same time, the pandemic has changed the nature of the types of law now getting more attention. Labour and employment law and occupational health and safety law are just two areas where there is a growing need to keep clients informed on dealing with mandates and policies resulting from the pandemic.

Fortunately, the winners of Canadian Lawyer’s Top 10 Quebec Firms are up to these challenges and have managed to survive in an ever-changing environment. While most of the trends they point to are faced by other lawyers – and many other professions – some are more peculiar to the province than others.

“It’s been totally different running a practice because of COVID-19. I’m amazed as to how the legal community, and so many other businesses, have adapted”
Sophie Perreault, Langlois Lawyers LLP 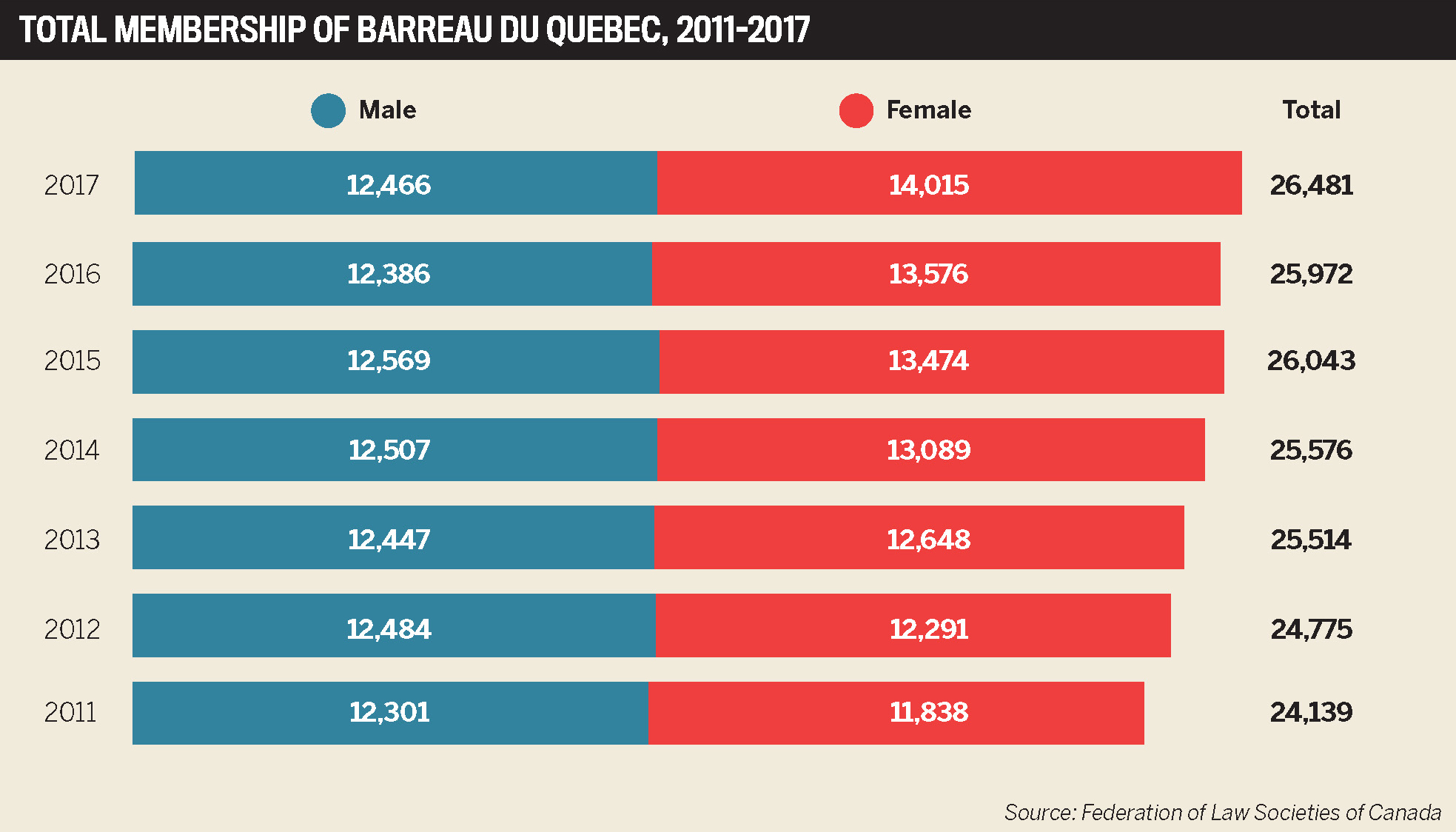 Teleworking and other changes

Gina Doucet, managing partner at Cain Lamarre, says the firm has had to deal with the new “mobility dynamics” that the pandemic has caused. Changes in the work structure itself – teleworking, the use of technology to allow for remote work, office occupancy and how best to use space – are just some of the many issues that the firm’s lawyers have been dealing with.

“We are preoccupied by these important changes in work structure, and our teams are supporting many organizations on the matter,” she says.

Doucet also points to labour and employment law, real estate law, insurance law, and even immigration law, among those areas of practice that have been seeing an upswing in client queries.

“It’s been a very interesting two years for employment-related law,” says Christopher Deehy at Lapointe Rosenstein Marchand Melançon LLP. Not only did law firms have to help clients maneuver the ins and outs of layoffs at the start, but they also needed to keep them informed with “quick, correct answers in an environment where protocols and rules are always changing.”

In a world of Zoom court hearings and remote work, practising law has opened a range of flexible options that were only just beginning to be contemplated before the pandemic, Deehy says. And some firms, including his, had to scramble a bit at the beginning. Nevertheless, the firm has generally become very comfortable with a hybrid work environment – one where boardrooms and offices have been turned into remote courtrooms. Lawyers regularly walk around the office in their gowns because, even in a remote courtroom environment, tradition and protocol still prevail.

“It’s been totally different running a practice because of COVID-19,” says Sophie Perreault, a partner and chair of the board at Langlois Lawyers LLP. “At the same time, it’s also the same, because, looking at things in retrospect, I’m amazed as to how the legal community, and so many other businesses, have adapted to things so quickly.”

A more hybrid court system characterized by in-court and remote hearings is likely here to say, adds Perreault, noting that it has made lawyers more productive and meant cost savings for clients.

“If you have a remote hearing, you don’t have to travel down to the courthouse and then wait, so it is good for everyone.”

Pierre Allard, managing partner at BCF LLP, says that a hybrid working environment has generally worked well at his firm. “We had the technology to accommodate remote workers, but the pandemic made us put our systems to work,” he says. “There are some people who come in regularly, and others haven’t come in much over the past two years – maybe once a month to pick up papers.” The good news, he says, is that it’s all working quite well.

“Young lawyers want to see stimulating files, having access to a mentor or coach, and progress in their career path”
Pierre Allard, BCF LLP

Cybersecurity is a growing concern

At top-rated Quebec firm Lavery Lawyers, CEO Anik Trudel says some of the current issues have also meant that all organizations now need to pay particular attention to cybersecurity. “Increases in computer attacks and the higher costs associated with data or personal information leaks have been widely documented,” she says. “Similarly, the mobility of information in a telecommuting context, the use of cloud storage, process automation and the increased connectivity of organizational systems increase organizations’ vulnerability to cyberattacks.”

Such data leaks can adversely affect an organization’s reputation with the public and the management and continuity of its day-to-day business. That is why any digital transformation – much of it necessitated by the pandemic – must address these issues. This includes cybersecurity governance and processes related to employees, suppliers and subcontractors and legal and strategic advice associated with implementing a digital transformation action plan as it is “necessary to ensure that every organization is complying with the law and the best technological practice.”

She notes that legislative and regulatory requirements for public and private sector organizations that hold personal data and information are also being enhanced, as evidenced by the recent adoption of Bill 64 by the National Assembly of Quebec in the wake of high-profile security incidents.

Jean-Jacques Rainville at Dunton Rainville agrees, saying that “cybersecurity, and the protection of personal information in particular, as well as artificial intelligence, are issues of concern in the legal world.”

“The use of cloud storage, process automation and the increased connectivity of organizational systems increase organizations’ vulnerability to cyberattacks”
Anik Trudel, Lavery Lawyers

Quebec has been called by some industry practitioners as the “paradise for class actions,” thanks to courts in the province generally favouring a liberal interpretation of criterial for authorizing a class action, says Trudel. The trend of between 80 to 100 class actions filed in the province each year is expected to continue.

Consumer class actions continue to make up most class actions in the province. Coupled with the Supreme Court of Canada’s 2014 Marcotte decision — which confirmed that the representative plaintiff does not need to have a direct cause of action or legal relationship with each of their defendants — it is not uncommon to see massive class actions across an industry.

As well, the COVID-19 pandemic has given rise to a related class action, such as claims launched against airlines for reimbursement following trip cancellations, claims made to insurance companies for business interruption, claims against schools forced into remote learning to reduce tuition fees, and claims to health care facilities relating to COVID-19 outbreaks. Lavery Lawyers says the pandemic will likely give rise to more class actions: “As the economy recovers, employment law class actions related to returning to the office and potential vaccine mandates could be the subject of the next wave.” 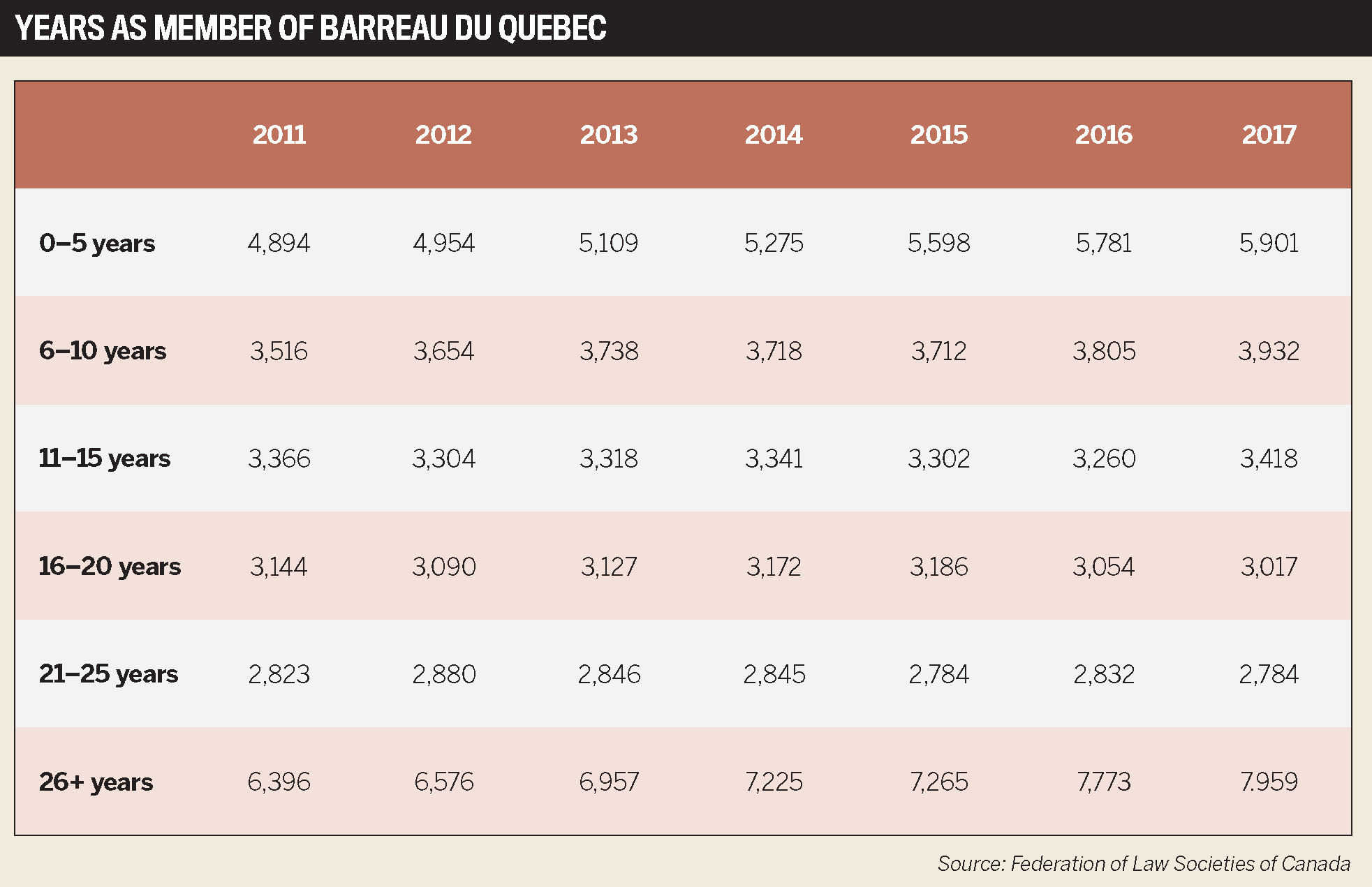 The war for talent rages on

Like those in many other regions, Quebec law firms have found that attracting talent is as challenging as it has ever been. “You are not just competing with other firms. You’re competing with other professions,” says Perreault, noting that those attending law school often don’t intend to practise law or work with a law firm. “Law is seen as a good education for going in many directions, whether it is working in a completely different job or becoming an in-house lawyer,” she says.

So, firms like Langlois have had to be more creative and flexible about meeting the needs of talented lawyers who may want to leave the profession. She points to one lawyer at the firm who wanted to work with a non-governmental organization. Rather than quit his job at the firm, he was able to take a leave of absence to follow that dream and then come back.

Lawyers joining the firm are often interested in terms of employment other than salary. “They want to know their career path, they want to be mentored,” Perrault says. “And perhaps most important, they want to be trusted to do the job they were hired for.”

Allard at BCF agrees that flexibility is an essential quality for law firms to offer to recruit and retain talent. “It’s not only about things like whether you work from home or not, but it’s also about working out with management about how many billable hours you want to work, because there may be other priorities at this point in your life,” he says. “Or it’s about accommodating health issues or parenting needs.”

When they are working, Allard says, “young lawyers want to see stimulating files, having access to a mentor or coach, and to see progress in their career path.”

Canadian Lawyer asked readers to vote for the top full-service regional firms in Quebec. In the survey, which took place between Nov. 22 and Dec. 17, 2021, respondents were asked to rank up to 10 firms from a long list provided. They were also given the option of adding a firm not included in that list. The rankings were based on the regional service coverage, client base, notable mandates, service excellence and legal expertise of the firms.

To qualify for the list and be voted for, firms were required to only have offices in Quebec and offer a wide range of legal services.

The final rankings were determined through a points system, in which firms were rewarded on a sliding scale for the number of first- to 10th-place votes received. The quantitative results were combined with feedback from respected senior members of the bar, in-house counsel, and the results of the Lexpert peer survey when applicable. The winners are listed here in order of ranking. A total of 1,137 ballots were received for the 38 nominated law firms.

Canadian Lawyer readers’ readers’ opinions are reflected in the survey results. If you do not see a Quebec law firm you feel should be nominated in future surveys, please let us know.