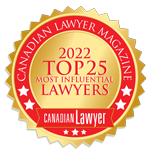 A place on Canadian Lawyer’s Top 25 Most Influential Lawyers list is a highly regarded accolade. Emmanuel Pressman, chair of the corporate department at Osler, Hoskin & Harcourt LLP and also an editorial board member, explains why, “I’m proud and privileged to be associated with Canadian Lawyer and thoroughly impressed by the consistent rigor of [the selection] process and supremely high quality of candidates, which gives me great confidence in our profession.”

The list reflects how the work of these members of the legal system has had an impact, whether in the courtroom, law school, law firm or business, or at a policy level.

“My priority is to implement the Truth and Reconciliation Commission’s Calls to Action relating to the legal system”
Bradley Regehr, Maurice Law

Our winners also admit that wearing the crown of influence comes with responsibility – to continue to use that influence to improve the legal world and those in it, or use their knowledge to make the world, as they say, “a better place to live”.

Bradley Regehr, president of the Canadian Bar Association from September 2020 to August 2021 and one of the winners in the government, non-profits and associations category, does not think of himself as influential. However, as he recalls what he has done within legal circles and the communities he serves, Regehr reappraises that. Contemplating how he has made a difference in getting people to rethink their views or process their thoughts from a unique perspective, he says, “I guess that makes me influential.”

Inclusion in the Top 25 is not a recognition of lifetime achievement. It is about the winners’ recent efforts to influence public opinion, help shape the law, contribute to the strength and quality of legal services, or have an impact within the justice community or government. 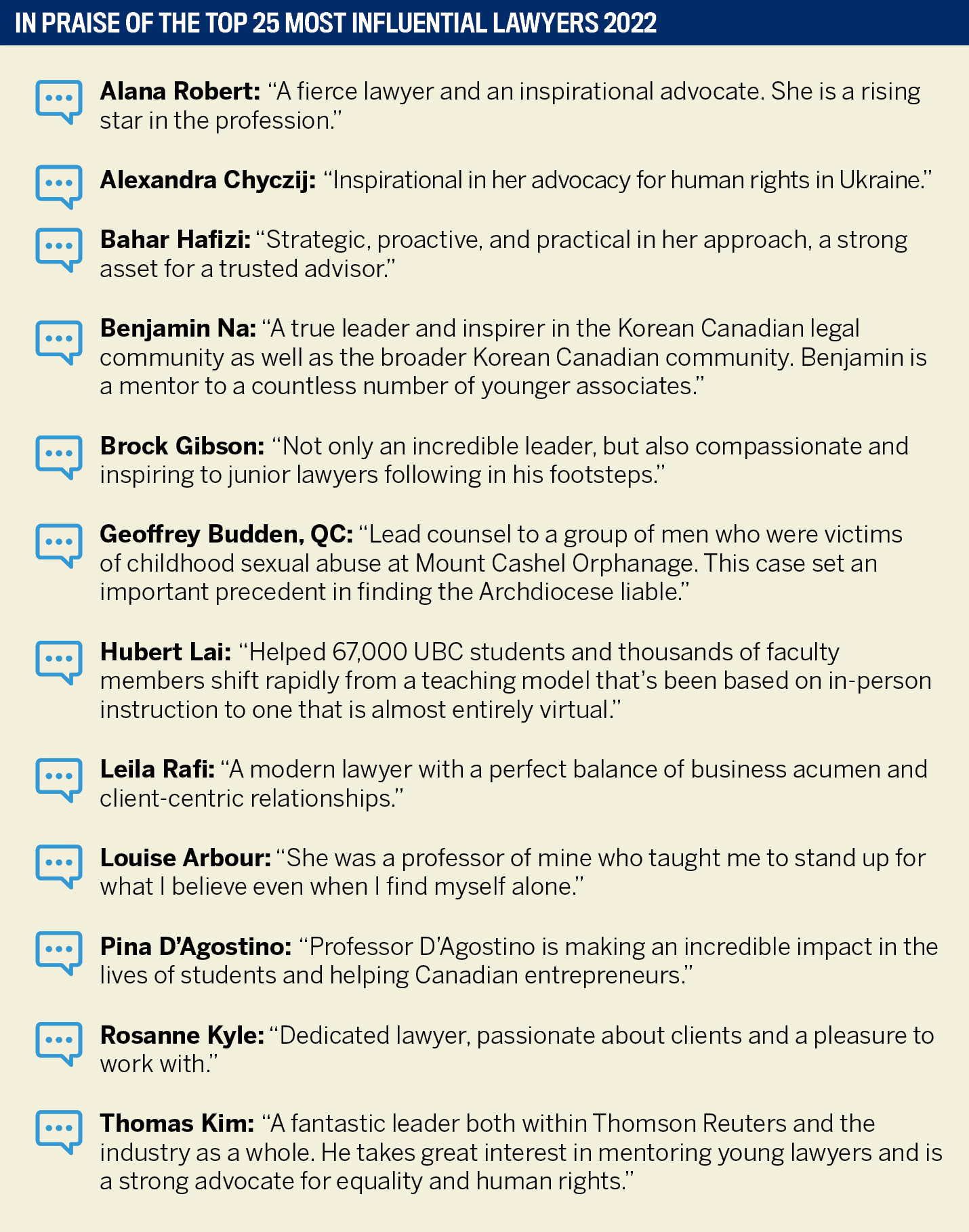 Having a voice – and using it

Alexandra Chyczij, a winner in the human rights and advocacy category, is president of the Ukrainian Canadian Congress. Testament to how effective she has been, her prowess hasn’t gone unnoticed by Vladimir Putin’s regime.

Chyczij considers landing on Russia’s sanctions list for her role in advocating for Ukraine as “a badge of honour” as it speaks to her ability to influence.

For her, the months since Russia invaded Ukraine have been “among the most difficult emotionally.” However, she has been touched by the outpouring of moral and financial support that Ukraine has received, and the role her organization has played in mobilizing that support.

“Perhaps for the first time in decades,” Chyczij says, “Ukrainians and the Ukrainian diaspora are finally being heard when it comes to threats Ukraine has faced in staying an independent democracy since it broke from the Soviet Union in the early 1990s.”

Chyczij highlights the irony that her generation of Ukrainian Canadians, children of displaced Ukrainians from the Second World War, are now assisting another wave of those displaced from their homeland.

Chyczij’s primary position is executive director of the Canadian Corporate Counsel Association, a role she has leaned into after being a civil litigator in private practice. But over the past year, as Russia signalled its intention to wage war in Ukraine, she has led advocacy efforts within the Ukrainian Canadian community and before the government of Canada.

She has helped shape Canada’s response to the invasion, advocating for the need to assist Ukraine in defending itself, raising awareness of crimes committed by the Russian Federation in Ukraine, and developing a resettlement program for those fleeing the war.

“Ukrainians and the Ukrainian diaspora are finally being heard when it comes to threats Ukraine has faced in staying an independent democracy”
Alexandra Chyczij, Ukrainian Canadian Congress

Being influential often affords the opportunity to leave your mark on a business and knowing you’re leaving it in good hands for future generations. Brock Gibson, the outgoing chair of Blake Cassels & Graydon LLP and a winner in the business category, says he is grateful for having the opportunity since 2009 “to take an awesome franchise and develop a truly national, integrated firm.”

Gibson, who had run a successful, Calgary-based corporate law practice at Blakes for many years, explains that when he took on his leadership role, the firm was “at an inflection point.” The fact that it was also the height of the Financial Crisis and Great Recession meant the firm was looking for an injection of energy, focus and teamwork.

One of Gibson’s innovations, which comes from his understanding of clients’ needs, was to develop a system for independent and regular performance-oriented outreach to clients to ensure that Blakes was actively engaged in helping meet the evolving needs of clients.

“It’s all about taking the long view,” Gibson says. “It’s not just about a particular file, it’s about building relationships, and providing consistency along with a pragmatic approach to meeting their needs for legal services.”

Gibson’s influence also extends to advancing diversity and inclusion at Blakes, which has consistently been named a Best Diversity Employer under his leadership. As well, as a founding member of the 30% Club Advisory Committee, he helped persuade Canadian CEOs to commit to increasing gender representation on their boards to 30% or more.

“It’s not just about a particular file, it’s about building relationships, and providing consistency along with a pragmatic approach to meeting their needs for legal services”
Brock Gibson, Blake Cassels & Graydon LLP

Stepping outside of the job

Telling your own story, no matter how painful it is, can be influential in getting others to do the same. Erin Durant, one of the top influential winners in the changemakers category, worked for both Big Law and Small Town Law before setting up her own practice and has been outspoken about her mental health struggles, especially during the pandemic.

The publication in January of her book It Burned Me All Down – an Amazon bestseller in categories related to the practice of law – is just one example of how Durant has impacted the profession.

“I started speaking out about this during the pandemic – I saw so many people I knew and people on social media who were having a difficult time,” she says. “I felt that sharing what I was going through publicly, given that I already had a bit of a profile, would be helpful to others.”

Durant also wants to raise awareness of the importance of legal representation, regardless of ability to pay, through her work with Pro-Bono Ontario.

Her mentor is the late David W. Scott, a renowned trial and appellate lawyer and a champion of access to justice who passed away in 2019 at 83.

“He was a very well known, influential lawyer. Anytime he had an opportunity to speak, he never made it about himself. He always used the opportunity to shine a light on a cause that was important to him. I try to follow in those footsteps,” she says.

“I felt that sharing what I was going through publicly, given that I already had a bit of a profile, would be helpful to others”
Erin Durant, Durant Barristers 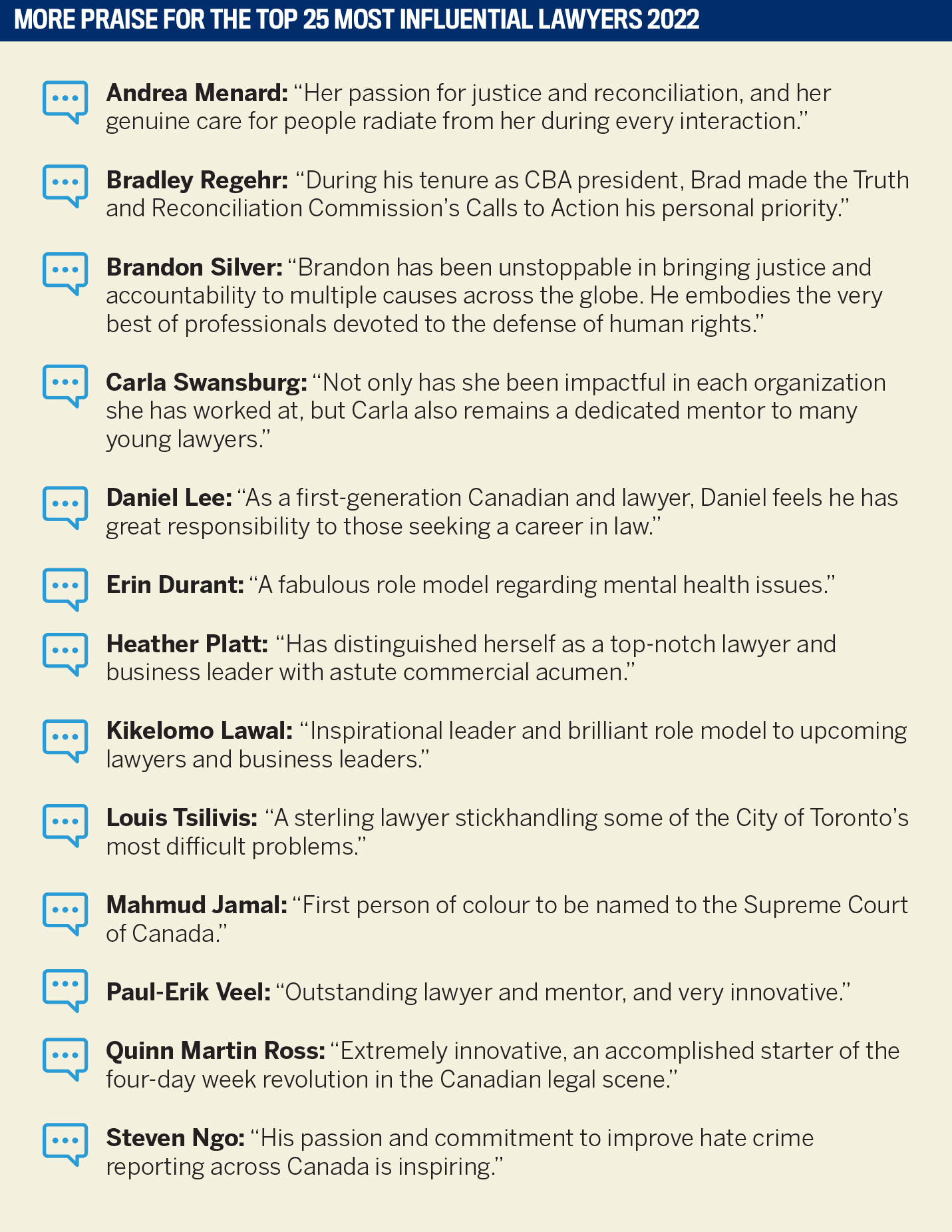 Being a role model

Regehr, the first Indigenous lawyer to hold the office of CBA president, has transcended legal circles.

He recounts a Purolator courier who was also Indigenous, and who remarked while delivering a package to his office: “Are you Brad Regehr with the Canadian Bar Association? I’ve been reading about you, and I’m really impressed.”

While personal recognition is welcome, Regehr says his “priority is to implement the Truth and Reconciliation Commission’s Calls to Action relating to the legal system.”

The CBA’s continuing professional development program, The Path, which focuses on Indigenous and Crown history, has become the most successful program in CBA’s history. “When I left the president’s position in 2021, 3,600 people had signed up for it. I found out recently that the number is now up to 5,000,” says Regehr.

With a busy practice at Maurice Law in Winnipeg, Regehr has an Indigenous focus on administrative and aboriginal law. He is proud of how Indigenous community members have embraced his success. A member of Peter Ballantyne Cree Nation in Saskatchewan, he was “incredibly moved” when he was presented with a star blanket in a traditional ceremony soon after becoming CBA president.

“My goal is to remain true to myself and true to my goal of paying it forward”
Kikelomo Lawal, CIBC

Being a mentor and role model can be a powerful influence on others – especially on those with shared experiences. Not only can they take inspiration from who that is and what they represent, but the role model is also a shining light as a beacon of hope.

Kikelomo Lawal, a winner in the in-house category and the first Black general counsel at a major financial institution in Canada (CIBC), is that person. And she wants to use her influence to motivate others.

“My goal is to remain true to myself and true to my goal of paying it forward, recognizing the opportunities I’ve had, the mentoring and advice I’ve received, and the work and life experiences that I hope others can learn from.”

As CIBC’s GC, Lawal wears many hats. She is the global leader for the bank’s legal and government relations, as well as the corporate secretary and ombudsman. She also performs privacy law functions. She has been through major litigation and significant transactions and also released CIBC’s ESG strategy and climate transition plans.

Lawal has also served on the executive committee of the National GC Network, which supports Black, Indigenous, and People of Colour legal leaders.

Asked what influence means to her, Lawal replies, “In a professional setting, I consider it to be knowing when and how to use any power or sway I may have so as to achieve good outcomes for the bank, for the teams I lead, and for those who may look to me as an example, advisor or mentor.”

Canadian Lawyer conducted this year’s survey between March 7 and April 8 by calling for nominations from legal groups, readers, and our panel of writers and editors. From the nominations from readers, our staff selected those who have influenced the legal system over the last 18 months in the following areas: changemakers; human rights, advocacy and criminal law; business; in-house; and government, non-profits or associations. We posted the long list online and asked for readers’ votes and comments. Then, members of our editorial board created the final list of 25 based on who received the most votes in each category.