COVID-19 pushed the pace of change for mediators and arbitrators, and our winners say many of these innovations are here to stay

Clients turning to arbitration as courts deal with backlog of cases

Last year at this time, mediators and arbitrators cautiously navigated the ins and outs of a legal system dealing with COVID-19. They were trying to figure out protocols and technologies that rarely, if at all, had been used.

But as the pandemic lingers on, those on Canadian Lawyer’s Top 10 list of arbitration chambers say they are “all in” on a system that incorporates many of the virtual and electronic practices that have got us through COVID-19 so far.

Jack Marshall, a lawyer with Western Arbitration Chambers in Calgary, says: “While doing arbitration hearings virtually has been technically possible for some time, it is only with the pandemic and the inability of parties to gather in a hearing room that virtual hearings became the only alternative to simply adjourning the hearing until an uncertain future date when the pandemic is over.”

To the surprise of many, he adds, counsel and witnesses find virtual hearings to be workable. While concerned at the beginning that online cross-examination was challenging, Marshall says participants have found proceedings quite effective, improving with practice. 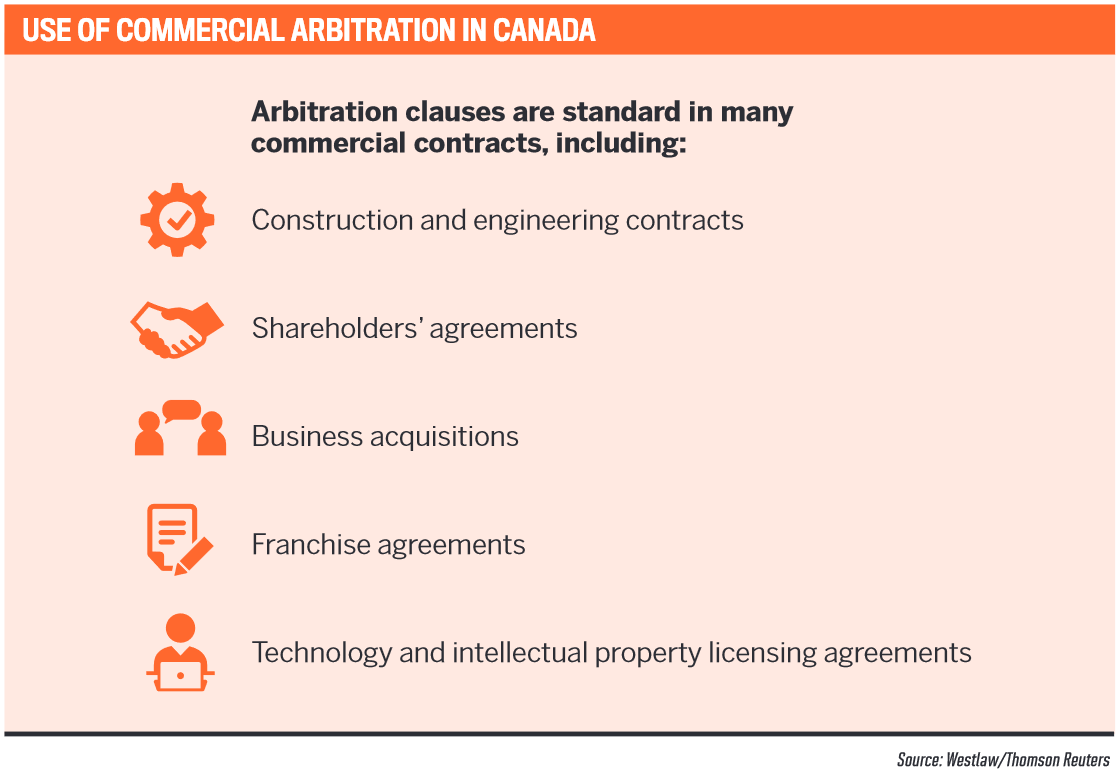 “For example, unlike live hearings where the focus of the witness shifts between the cross-examiner and the tribunal, with a virtual hearing the witness is focused directly at the camera, thus making it easier to ‘read’ the witness.”

The pandemic has accelerated the use of technology, says Paul Torrie of Toronto-based Global Resolutions. “The most obvious example is the use of video conferencing platforms.”

An early pivot to virtual hearings

Early on in the pandemic, counsel and their clients quickly pivoted to using video conferencing. And though it is unclear how extensive use will be post-pandemic, arbitrators say “all indications are it will be a permanent feature of practice.”

Kim Neeson, with Neeson Arbitration Chambers in Toronto, envisions a world where more proceedings will use a hybrid model of in-person and virtual arbitration and mediation, as people get vaccinated and others choose not to. As well, she says, “the way we look at travel for arbitration has changed.” How much and how quickly the arbitration process will change depends on the dispute’s nature and the participants’ views and comfort level with the technology involved. “But I think that virtual hearings are here to stay for at least a percentage of arbitrations.”

Another Toronto-based arbitrator, Tanya Goldenberg at ADR Chambers, says there will be a pivot towards more virtual hearings and less done in person. But there will always be a need, and desire, for closer contact in a post-pandemic world. Already she has had discussions where parties suggest that it would likely be by Zoom if the matter goes forward during the summer. “However, if it is October, and everybody has had both doses of their vaccine, we could potentially do it in person.”

The increased use of document sharing on cloud platforms has also substantially impacted arbitration, Goldenberg adds. She points to the ability to record most virtual proceedings and share screens to point to specific materials.

There is also the concern about who exactly is in the room during online hearings. Goldenberg says most arbitrators have witnesses take an oath that includes swearing that no one else in the room and that they will not using a computer for other purposes during the hearing.

The possibility of arbitration being done chiefly through virtual means could also have an impact on the dynamic of selection counsel and experts for settling matters by arbitration, says Marshall, “as they can be chosen without regard to where they are based.”

Travel and accommodation expenses are not as much of a factor, he adds, and “so the expense of an arbitration ought to be reduced as it is unnecessary to book facilities to host the arbitration, and travel times for those participating are essentially zero.” This model of using arbitration should lead to an increase in its use to resolve commercial disputes.

Michel Jeanniot at the Canadian Arbitration Centre in Montreal says the reduced costs of virtual arbitration mean some parties might choose that for cases involving smaller dollar amounts. As the cost factors relating to arbitration go down, Jeanniot says, there is an increase in the “smaller ticket” matters, and ultimately it is a good thing to “use the private resource of arbitration to resolve disputes.”

Jeanniot notes parties to a dispute have long turned to arbitration as a means of achieving a resolution more quickly than the court system permits. However, economic pressures are pushing clients to demand ever-faster results, and “even traditional arbitral procedures can seem lengthy and cumbersome.”

He adds that new and evolving tools for resolving disputes quickly and efficiently including expedited procedures, summary dismissal, and emergency procedures could “lead to an increase in the proportion of high-value arbitrations through the intro-duction of case management technologies.”

Torrie in Toronto agrees that “costs and systemic delays are motivating more litigants to try and settle their disputes much earlier.” He says he sees more mediations scheduled before discoveries, and even before the exchange of pleadings.

Jeanniot says the arbitration community must embrace technological developments to become faster and more efficient. “This includes the shift towards artificial intelligence, big data, and the Internet of Things,” he says. “Rather than viewing these trends as a threat, we must take advantage of the bene-fits of technological evolution. It is capable of entirely transforming the landscape of dispute resolution.” 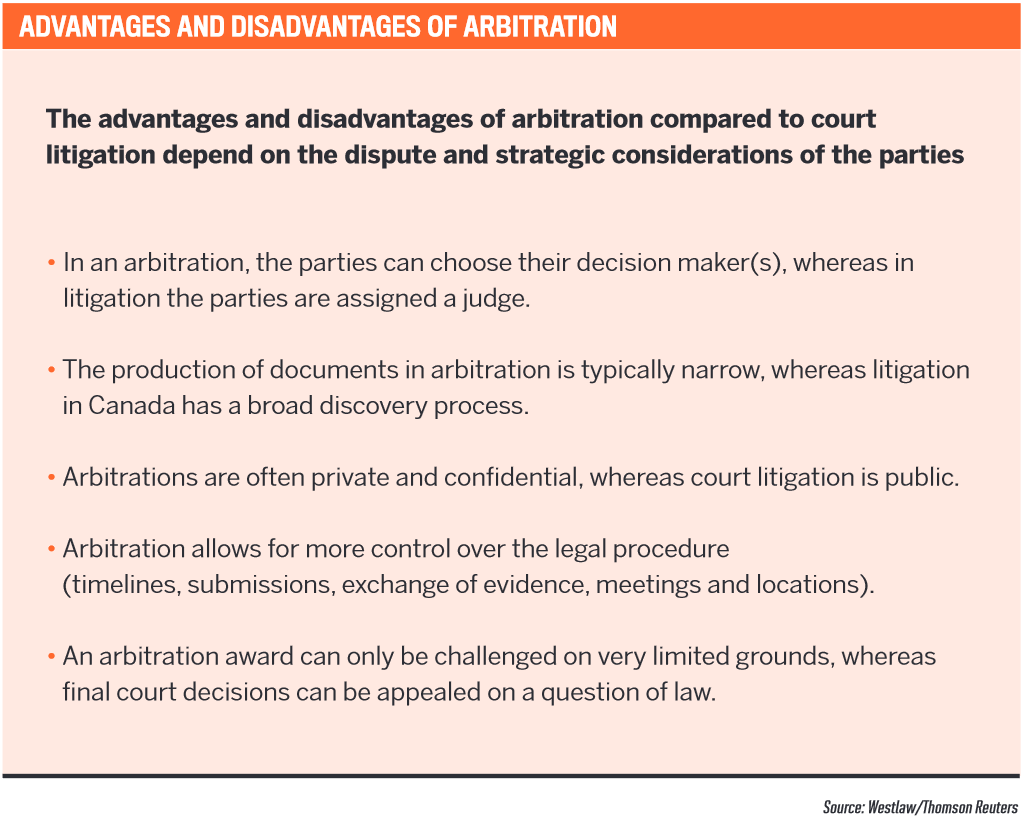 Barry Penner, Managing director at Vancouver International Arbitration Centre, says lawyers are “increasingly resorting to arbitration, as the benefits outweigh concerns over unfamiliarity with the process.

“Arbitration better meets the needs of disputing parties when it comes to efficiency, costs and control of process, including choice of decision maker.”

All hands on deck to clear backlog

Torrie sees an “all hands on deck” response needed once the pandemic is under control and more services return to normal. “Public health restrictions on the operations of the courts during the pandemic have created tremendous back logs,” he says. Mediators and arbitrators will need to join in with other stakeholders to tackle this challenge, he says, adding “innovation, imagination and flexibility will be the watch words.”

But Neeson says that for all the advantages COVID-19 has shown us about using technology to improve the arbitration process, she thinks there will still be a desire for, or at least nostalgia for, the “old days.” Parties in the arbitration process met at neutral premises like her office for what often turned out to be a “day-long event.”

“There’s the food, there’s the coming together in big face-to-face meetings, then there are break-out sessions in conference rooms to discuss strategy, and depending on the arbitrator, the process can to long into the night,” she says. “There will be some who will still want that, along with the innova-tions we’ve seen used recently.”

Earlier this year, Canadian Lawyer asked lawyers, in-house counsel, and clients from across Canada to vote on the arbitration chambers. They were asked to rank their top firms from a preliminary list, with a chance to nominate a firm that was not included on the list. To be considered in the vote, firms were required to have at least 80 per cent of their business come from arbitration. The final rankings were determined through a points system, in which firms were rewarded on a sliding scale for the number of first to 10th-place votes received. The quantitative results are combined with feedback from respected senior members of the bar and in-house counsel when applicable. 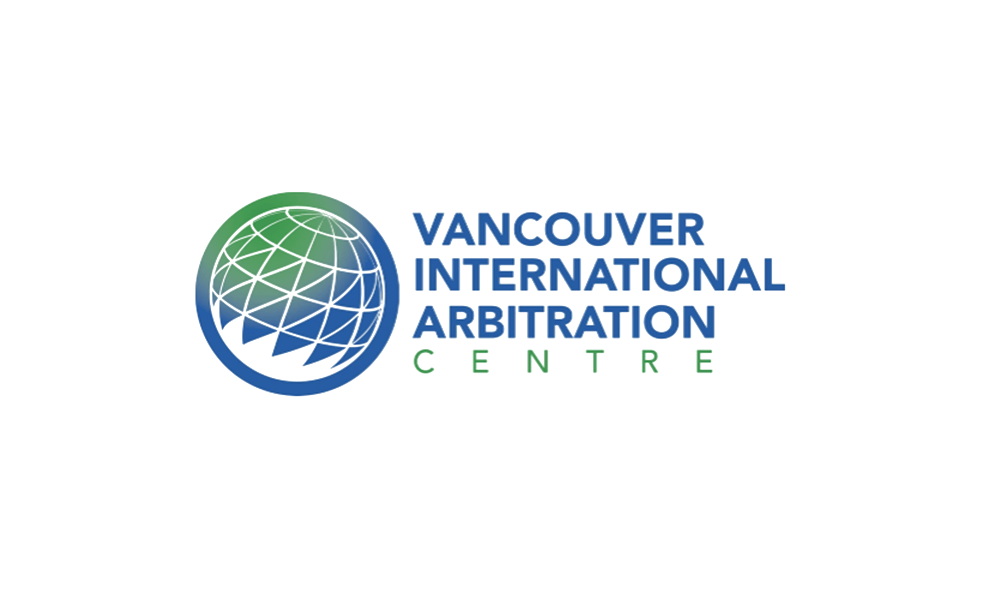 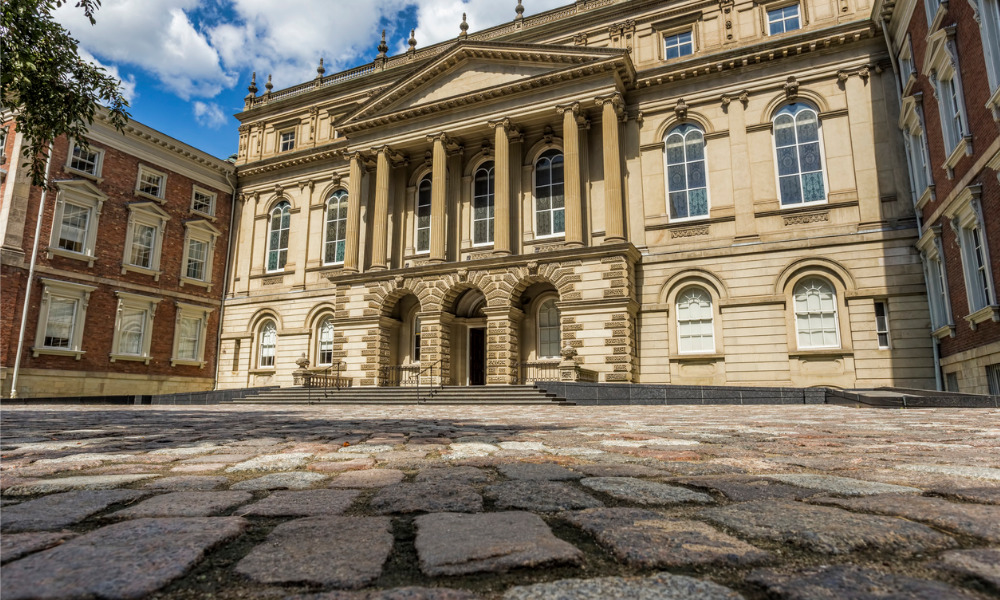 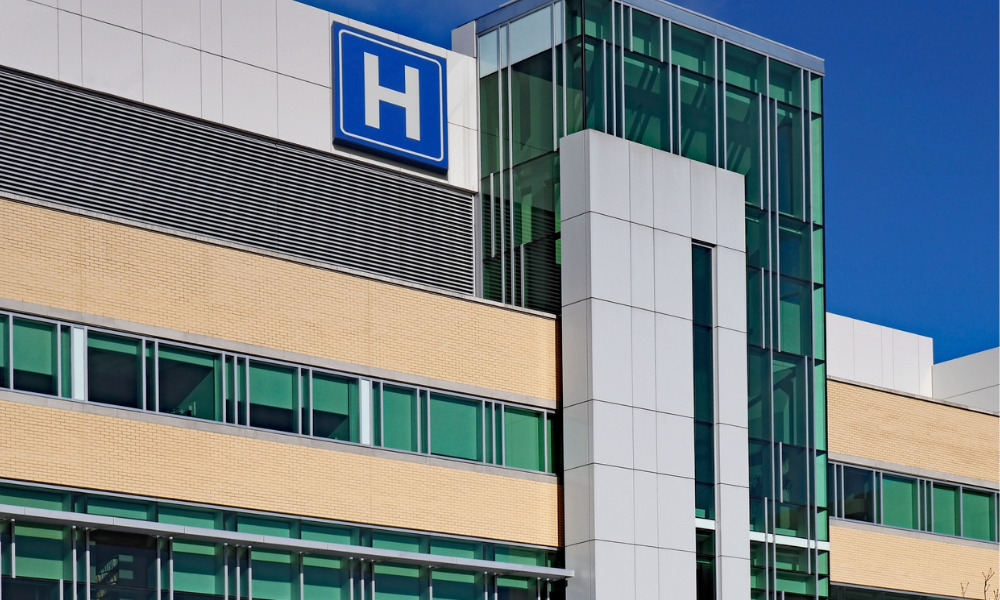 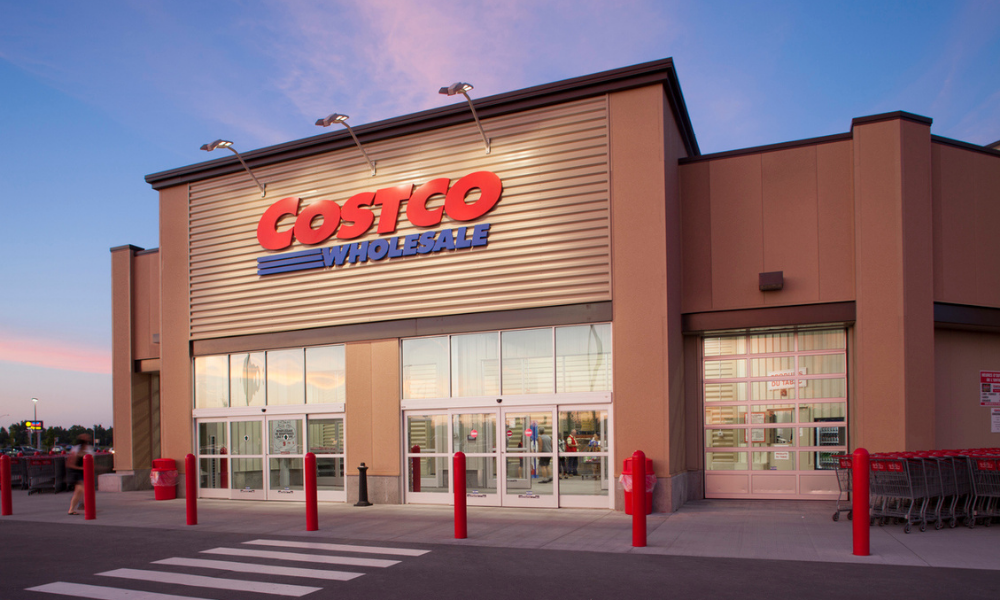 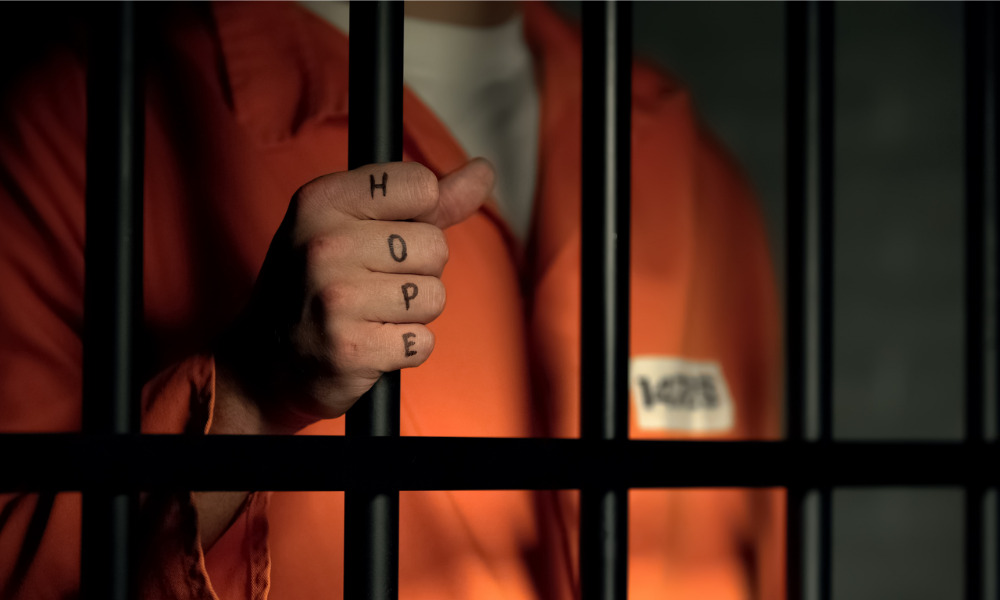