Quebec courts have the right to determine actions brought by two Innu First Nations over mining activity on their traditional territory, including in Labrador, the Supreme Court of Canada ruled today in a 5/4 decision.

Although the case came up from the Quebec courts and relied on the Civil Code of Quebec, it is expected to apply to other First Nations’ control over their traditional lands across Canada.

“It’s an historic judgement, because it will now permit Aboriginal communities with traditional territories … spanning two provinces” to bring actions for abrogation of their rights in just one jurisdiction, says Jean-François Bertrand, principal of Jean-François Bertrand Avocats in Quebec City, who acted for the respondent Uashaunnuat (Innu of Uashat and of Mani-Utenam) and its associated chiefs and band.

“This is the first time the Supreme Court of Canada has recognized the possibility for an Aboriginal community to do that,” Bertrand told Canadian Lawyer.

In Newfoundland and Labrador (Attorney General) v. Uashaunnuat (Innu of Uashat and of Mani‑Utenam), the Quebec Superior Court was asked to decide whether the claims made by the two affected Innu nations under s. 35  of the Constitution Act, 1982 , which recognizes Aboriginal and treaty rights in Canada, could straddle two provinces: in this case, Quebec, and Newfoundland and Labrador?

And -- in this private international law case concerning jurisdiction -- was the action that was brought by these two Innu communities, namely the Innu of Matimekush-Lac John, and the Innu of Uashat and of Mani-Utenam, a real action, personal action or mixed action under the Quebec civil code?

In today’s 200-page decision, a majority of the Supreme Court found that the Quebec courts had jurisdiction to hear the matter, despite the action spanning two jurisdictions. And the action was a mixed action, though not in the classic sense of the term, as it involved the recognition of unique Aboriginal rights as entrenched under s. 35 of the Constitution.

“We agree with the intervener the Tsawout First Nation that this is particularly unjust given that the rights claimed pre-date the imposition of provincial borders on Indigenous peoples,” the majority wrote.

“We reiterate that the legal source of Aboriginal rights and title is not state recognition, but rather the realities of prior occupation, sovereignty and control. … We do not accept that the later establishment of provincial boundaries should be permitted to deprive or impede the right of Aboriginal peoples to effective remedies for alleged violations of these pre-existing rights.” 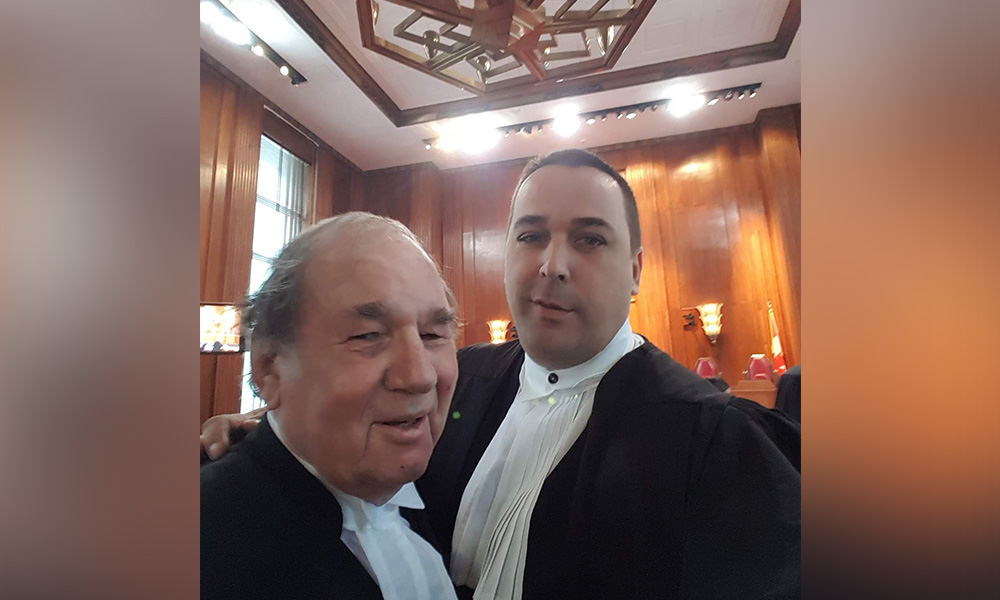 Quebec litigator François Lévesque was counsel to the respondent Innu of Matimekush-Lac John in Quebec, and associated individual parties. Lévesque worked with James O'Reilly of O'Reilly & Associés in Montreal, who represented several other individual members of this Innu First Nation.

“For the majority, the key was greater access to justice,” says Lévesque, who, along with Bertrand, notes that the cost to bringing litigation in two jurisdictions “would have been prohibitive” to the Innu. The fact that the Innu, who traditionally follow caribou, are nomadic adds to that burden, he says.

“This is a situation in which I think the chief justice was uncomfortable, because Chief [Justice] Wagner is a long-time proponent of access to justice,” Lévesque adds.

In 2013, the two affected Innu First Nations sued two mining companies in Quebec -- the Iron Ore Company of Canada and the Québec North Shore and Labrador Railway Company – asserting their right to exclusive use of the land taken by the companies’ mining megaproject, that land had been used without their consent, and depriving them of its use and enjoyment of their traditional territory.

Their application asked for a permanent injunction against the mining companies, ordering them to cease all work related to the megaproject, $900 million in damages, and a declaration that the megaproject constitutes a violation of Aboriginal title and other Aboriginal rights recognized and affirmed by s. 35  of the Constitution Act.

The Quebec Superior Court found that it had jurisdiction to hear the entire claim, and its ruling was upheld by the Quebec Court of Appeal, which held that it was inappropriate to “classify the Innu’s action as being a strictly real action, [given that] it is not possible to describe Aboriginal rights in terms of traditional property law concepts” and that “[t]hese are sui generis rights.” Aboriginal title and other Aboriginal or treaty rights “ha[ve] other elements that may be characterized as ‘personal’ between the Aboriginal community in question and the Crown,” namely the Crown’s “fiduciary duty to Aboriginal people” and its “duty to consult and to accommodate Aboriginal communities, which is personal in nature,” the Quebec Court of Appeal found.

The mining companies argued that traditional Aboriginal title is a real (or property) right; and the appellant Attorney General of Newfoundland and Labrador argued that, for a real action, Quebec courts only have jurisdiction if the property is entirely in Quebec.

In dissenting reasons Justices Michael Moldaver and Suzanne Côté, also writing for Justice Malcolm Rowe, found that Aboriginal and treaty rights should be considered real rights for the purpose of private international law. Although they are unique rights to Aboriginal peoples, they resemble real rights (concerning land), and so should be counted as such.

Therefore, for Quebec courts to have jurisdiction in litigation, the property must be located entirely in Quebec. Since this was not the case here, the action should be narrowed to the property that is in Quebec, the minority held.

“The judgement by the Supreme Court of Canada is lengthy and we are continuing to review the decision,” the Government of Newfoundland and Labrador said in a prepared statement, noting that “the decision is not a determination of the merits of the Quebec Innu claim in Labrador and the Supreme Court made no comments respecting the strength of such claims.

“This is a dispute between the Quebec Innu and a mining company. The Innu have admitted that the decision they seek from the Quebec courts will not bind the Newfoundland and Labrador Crown.”